Trust Your Instincts to Recognize Danger

By design, parks and attractions are highly social places where friends and families gather to have fun and enjoy each other’s company, as well as mingle with other visitors. There is a code of conduct by which guests abide so that the good times can roll along with the coasters.

As is the case whenever throngs congregate, however, some visitors may not always play by the rules. Some people may cause disruptions and potentially derail the experience for everybody. With proper training, staff members can learn to read crowds, identify potentially dangerous incidents, and deescalate them.

According to body language expert Patti Wood, there is an emotional contagion in crowds, in which people are naturally drawn to the same energy. It is part of a phenomenon known as “isopraxism,” a neurobehavior that explains the groupthink exhibited by birds that flock together in formation, fish that swim in schools, and humans that rise on cue to make waves at stadiums.

“It’s all very primal,” says Wood, noting that it is part of our limbic system and tied to our survival instinct. “If there’s a crowd, that must be where the good food is.”

Clusters of people tend to laugh and applaud together at park shows because of isopraxism. Visitors also migrate toward and tune into the nervous energy of large crowds that are excited about thrill rides.

However, people may sometimes find themselves moving in the direction of danger when they follow the pack.

Perhaps an altercation is brewing between two guests. Or an agitated visitor may be acting out. Whatever the situation, once others in a crowd recognize a threat, their central nervous system kicks in with a surge of adrenaline, and they may engage in a fight or flight response. Parks and attractions need to be concerned about the fight option.

Situations can quickly get out of control when people in crowds start joining the fray. Wood says that front-line employees, as well as security team members, should be trained to recognize the body language of people in a fight response. Examples include a wide stance with outward-facing feet, as well as hands on hips with elbows facing out. Or people may ball their hands into fists and excitedly move their arms up and down. It’s all part of an attempt to make their bodies appear bigger.

Employees should also listen to crowds. Anything that diverges from the laughs, cheers, screams of thrill ride passengers, or other everyday ambiance might be a cause for concern. They should pay attention to discordant, lower-register, or uneven sounds.

Just as autonomic fight responses can cause visitors to create a ruckus, workers at parks can rely on their central nervous systems to help alert them to dangerous situations.

“I know this sounds odd,” Wood notes, “but you want to train employees to be present in their bodies.” They will have a sixth sense when something is amiss in a crowd. “It’s a visceral instinct,” she adds. “People have the ability to analyze up to 10,000 nonverbal cues in less than a minute.”

Adam Coughran, president of Standards Training Group, agrees. “In one of my training courses, we talk about the art and science of visual intelligence.” Employees should receive security-based training to help them recognize suspicious and concerning behaviors. But, he says, they can also get a vibe that something is not quite right in a crowd. 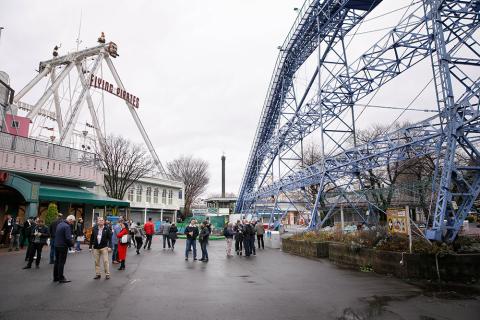 The goal is to prevent or mitigate anything bad or dangerous from happening, adds Coughran, who logged 20 years in law enforcement as a tourist-oriented policing officer for the Garden Grove District in Anaheim, California, that includes the Disneyland Resort.

Wood recommends that parks and attractions adopt a green/yellow/red system to gauge crowds. Employees can try to address yellow warning situations by intervening and redirecting people’s attention. They could suggest that they move to a different area of the park to see a show that is about to start, for example.

Employees should have a range of response protocols to safely de-escalate an altercation, notes Coughran. But if they can’t quickly get a handle on it and it devolves from a yellow to a red situation, they should alert the park or attraction’s security team. And if security is unable to contain an emergency? “They should report it to law enforcement to get the cavalry there,” he says. In the interim, security should try to corral or contain those causing the problem, ideally moving them backstage and away from other guests.

“Parks have a wonderful ability to lift us, make us feel as one, create connection, a sense of community, and engender the positive aspects of a tribe,” Wood says. Unfortunately, the emotional contagion that can quickly transform a crowd can swing in both directions, and the deck is stacked in favor of the bad apples. “One person with negative energy has a stronger pulling effect than three people with positive energy,” she contends.