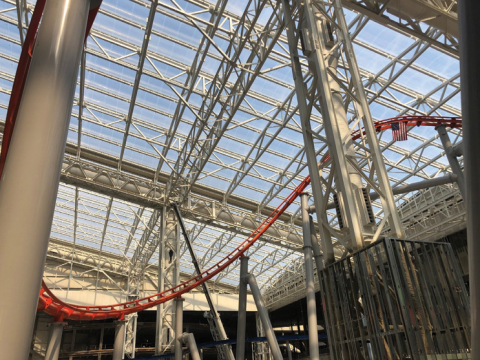 The Nickelodeon television network’s trademark slime made its first appearance in 1979 on a show called “You Can’t Do That on Television.” Nickelodeon has featured the gooey green substance on numerous shows ever since, dropping loads of it on supposedly unsuspecting characters. Now, it’s become the name and theme of a roller coaster at Nickelodeon Universe that will open later in 2019.

“Nickelodeon Slime Streak,” the indoor coaster by Chance Rides, is 1,263 feet long and rises to a height of 70 feet. The family ride reaches a top speed of 37 mph. Jeff Davis, attractions director at American Dream Meadowlands, says the ride is a custom design, including its single train, which features five cars arranged with two rows of two riders, for a total of 20 riders. The coaster’s capacity is 900 riders per hour.

“‘Nickelodeon Slime Streak’ will be located in the center of the park,” say Davis. “This family-friendly coaster will take riders on a thrilling, bird’s-eye view of over half the amusement park by winding its way over, around, and even through 13 attractions. The distinctive orange rail and slime-themed train will travel over the heads of guests walking throughout the park. An elevated station house will give waiting riders a terrific view of the park and the lift hill that reaches to the roof.”