Monica and Friends on the Go The friendly faces of Monica and Friends first paid Florida a visit in 2019, when they embraced the industry at IAAPA Expo in Orlando (see left).

This week, Monica and her friends are back in Florida—and on the move. In a new “Art on Wheels” exhibit, the beloved comic characters from Brazil now grace the exterior of a coach from GoPegasus, the Orlando-based travel, transportation, and events company. The company refers to their fleet of buses as a moving canvas, where artwork from cartoonist Mauricio de Sousa will now stroll the highways and byways of the United States (below). 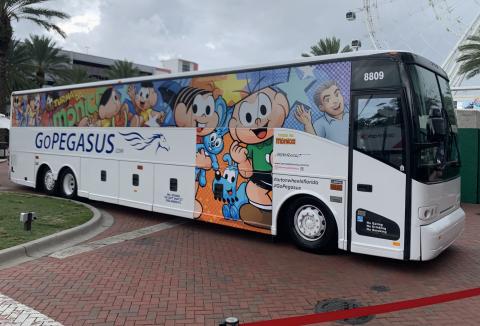 “This unprecedented project to illustrate and theme buses with characters from Monica and Friends is part of the brand's internationalization plan,” says Mauro Sousa, a division leader at Mauricio de Sousa Productions. “It is not merely a commercial action, but a true artistic expression made to inspire and move."  Mauricio de Sousa Live Productions transforms comic books into live experiences in a playful, educational, and cultural way. “It’s always rewarding to see IAAPA Members innovate with new projects,” says IAAPA President and CEO Hal McEvoy. “Monica and Friends are a beloved ambassador of Brazil. The ‘Art on Wheels’ program will allow folks across North America to meet Monica and experience the joy she creates.”

The “Art on Wheels” concept was conceived by GoPegasus founders Fernando Pereira and Claudia Menezes. The pair envisioned their fleet of 62-passenger busses as traveling pieces of art, which could serve as mobile inspiration.

"For over 28 years, our travel and transportation company has been passionately dedicated to the arts community,” says Menezes, one of the co-founders of GoPegasus. “When the arts thrive, we all thrive.”