Harnessing the Power of Influencer Marketing 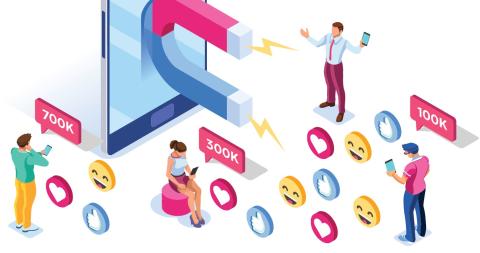 A mom blogger posts about taking her kids to the local water park. A travel Instagram goes live in front of a newly opened roller coaster. Bargain-hunting influencers share their favorite money-saving tips for eating at a theme park on a budget.

Across Instagram, TikTok, YouTube, and other social media channels, influencers are creating more and more attractions-oriented content. But many facilities haven’t yet figured out how to tap into this potent marketing strategy. How can attractions find influencers who’d be a good fit for their brand? What’s the best way to build relationships with influencers? How should these partnerships be structured so it’s a win-win on both sides?

Identifying Influencers
Heather Concannon, communications manager for Legoland Florida Resort in Winter Haven, has worked with influencers for several years. “We are a resort that’s built for real families, so we look for families to share their real experiences with their followers,” she says.

The ages of each family’s kids are also a consideration. “Legoland is a resort that targets children ages 6 to 12, and Peppa Pig (its newest attrac-tion) is a bit younger, so it skews from 2 to 12,” Concannon explains. “We look for families with those demographics, but we look for a diversity of families: real families and different sorts of makeups.” Peppa Pig Theme Park Florida is also a certified autism center, so the team works with fami-lies in that area, too. Instagram stories are a big focus for Legoland, but it’s also branching out into TikTok, a short-form, video-sharing social media platform.

“We tend to focus on micro influencers because they focus on a specific niche or area and are generally regarded as an expert or topic specialist,” says Julie Dion, president of Dion Marketing, which works on influencer marketing for attractions clients, including Daytona Lagoon. “Micro influencers also tend to have higher engagement, one of the other qualities to look for. Are people liking and commenting on the influencer’s post? If so, that is a good sign of high engagement and something to ask influencers for—social media statistics that include engagement.”

While high follower count with low engagement could mean that an influencer’s followers just aren’t that into their content, it could also mean that the followers are fake. Some influencers purchase follows from bots to inflate their numbers, so looking at engagement can help to avoid this.
“Other qualities to look for that are not easily measured include likability, if they are passionate when posting, [and] if they seem authentic and have the ability to establish authority,” Dion adds.

Building Relationships
At Legoland, influencers approach the communications department, often via email, rather than staff members reaching out. “We form a relationship very similar to how we handle media relationships,” Concannon says. “I work with each very differently to make sure they are getting an experience that they can really enjoy with their family and that they want to share with people.” Concannon likes to learn what their families like to do and what kind of content they like to share, but there are no set itineraries or agendas.

Sometimes influencers reach out to attractions via direct message (DM) on a social platform, but Fab Giovanetti, marketing consultant and founder of Alt Marketing School in the United Kingdom, recommends moving the conversation to email as early as possible so communication can proceed in a professional manner.

“You will be in charge of discussing when you are going to pay the influencer but be open to a compromise based on how historically the influencer has been working with other brands,” she says.
Legoland works via trade, so none of their influencers are paid. Instead, they receive complimentary tickets, parking, and sometimes hotel experiences in exchange for posting about the experience.

Dion Marketing works with influencers in a similar fashion. “We always offer an experience at the park in exchange for social media content,” Dion says. “We do offer an affiliate program to reward influencer efforts, which attracts influencers by providing a unique promo code for each influencer affiliate to give their followers a discount to the attraction, and they earn a portion of ticket sales. We also create and provide a one-sheeter of benefits of what we are offering, and we make sure that expectations are clearly defined on both sides.”

Setting Expectations
Before agreeing to work with an influencer, it’s important to get clear on what the attraction’s goals are and how to know if the campaign met those goals.

“We measure success by looking at the deliverables and making sure the influencer did everything they agreed to,” Dion says. “Influencers sign an agreement that outlines what they have agreed to do, which include a schedule of posts and the minimum number of social posts, what platforms they will post [to], incorporation of Instagram stories, a long-form Instagram post with a set number of images and/or videos, what hashtags to use, and whom to tag.”

Dion likes to do multiple sponsored posts with each influencer rather than one-offs so she can build deeper relationships. She also encourages operators to include in their communication that if influencers see something negative, they should let the attraction know so they can fix it, rather than just sharing the negative experience with their followers.

Of course, there are other factors to consider beyond whether the influencer reported any issues or used the right hashtags.

“Metrics like brand sentiment and engagement can really show how people are connecting to your brand as a result of working with influencers,” Giovanetti says. “For a clear ROI, you can also offer discount and coupon codes that will be able to show you the return on investment in a more exact way.”

Planning Campaigns
Work on influencer campaigns typically starts months in advance, especially on limited-time events or attractions. When Concannon is promoting seasonal events like “Brick-or-Treat,” Legoland’s Halloween event, she emphasizes to influencers that they can be among the first to experience it and share it with their audience. “A lot of the times I’ve found, by not stressing a deadline or itinerary, they’re more eager to share their experience,” she says.

Weather and family life can be unpredictable, so planned visits sometimes need to be rescheduled, especially when working with mom influencers.

“With young children in tow, there are always things that come up unexpectedly,” Dion says. “With seasonal parks, we recommend frontloading the season to get the most out of their posts. But it really depends. For example, a promotion that starts in August could benefit from having an influencer talk about that promotion in the beginning of August.”

At the end of the day, remember, unlike other marketing channels—like digital ads or paid searches—influencers are also people.

“This is also an opportunity for them to build memories with their families,” Concannon says. “They could fall in love with Legoland and just keep coming back, so that is definitely a key part of a successful influencer marketing relationship.”