Four years ago, management at Morey’s Piers and Beachfront Water Parks and Resorts came up with a clever idea. The facility in Wildwood, New Jersey, would hold a “Gone to the Dogs” event where on the park’s closing day, guests could bring their four-legged friends to swim in the pools before they were drained for the season.

Everyone at Morey’s loved the concept, but they realized they had a sizable hurdle to overcome for it to be a success. The event would happen in just four weeks, relatively last-minute in the marketing world, and there was not enough time to put together a meaningful print-ad campaign to support it.

So instead, they did some brainstorming and decided to promote “Gone to the Dogs” exclusively on social media, explains Kristel Fillmore, the venue’s content and entertainment manager. They had never done anything like this before, but any hesitation about the plan quickly evaporated. The event sold out almost instantly, with 250 dogs and about 500 humans splashing around to celebrate the end of the season.

As a result of the creative marketing win, Morey’s has skipped any formal campaign in subsequent years around the dog event, choosing to go social media only. (The event sold out each time.) Not only that, lessons learned through this experience helped the team to leverage the vital marketing platforms to promote other events held at the popular Jersey Shore destination.

Fillmore shares tips on how attractions of any size can make the most of social media to market their upcoming events, and maintain a high level of engagement with their guests. 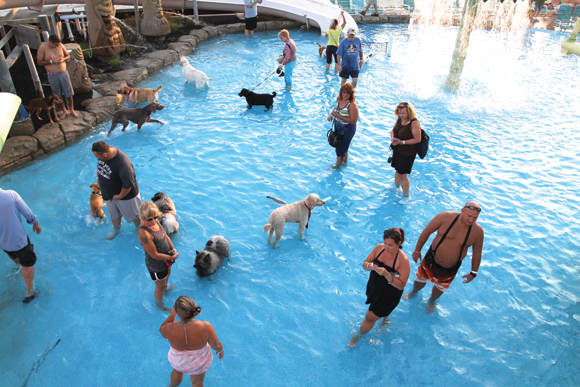 Morey’s uses Twitter, Instagram, and Snapchat, but Facebook is the true heavyweight that delivers the most. The simple reason? “Moms are typically the decision makers for families,” Fillmore says. “And that’s what they’re on—Facebook.”

Plus, it does not hurt Morey’s boasts more than 160,000 followers on Facebook.

For the marketing copy, keep a lighthearted tone (no heavy-handed sales push) with text short and sweet, Fillmore recommends. Lean on videos, GIFs, and photos to tell the story of the future event.

However, this visual approach can become a bit tricky for first-time events, as attractions lack images from previous years to use, she says. That is when facilities need to get a bit creative. For example, for last year’s inaugural Oktoberfest campaign, Morey’s bought some eye-catching stock images of things like German beer and bratwurst to convey the overall concept of the event.

Social media managers just need to resist the urge to steal random images found on Google without permission, she cautions: “That’s a definite no-no. You can cheaply buy low-res images.”

Even some websites, like Pexels and Pixabay, offer stock photos that can be legally snagged for commercial use at no cost.

Facilities should strive for a healthy balance of event messaging and general-interest posts of people simply enjoying themselves on rides, or snacking on curly fries.

“Yes, it’s a sales and marketing platform, but it’s also a way to interact with your guests,” Fillmore says. “You don’t want it so every time they land on your page it’s like a billboard slapping them in the face.”

As a general rule, Fillmore schedules posts about events—a good time-saving tool—about one or two times a week for the four to six weeks leading up to the date.

She also generally sets up separate event pages through the main Morey’s Facebook page to further help with promotion. Through this extra step, guests can click a link that goes directly to the website to buy tickets, as well as tag their friends to see if they want to attend—a practice that allows customers to help market the event for the park.

Guests may have questions about the event in the time leading up to it—and they will likely ask them via social media.

“People don’t want to pick up the phone and call anymore,” Fillmore says. “They would rather type it in and get a response.”

That is why attractions need someone regularly manning the controls primed to supply answers, especially when promoting an event on social media, she notes. Otherwise, guests may spend their time and money elsewhere when met with silence, and the event could turn into a big bust. 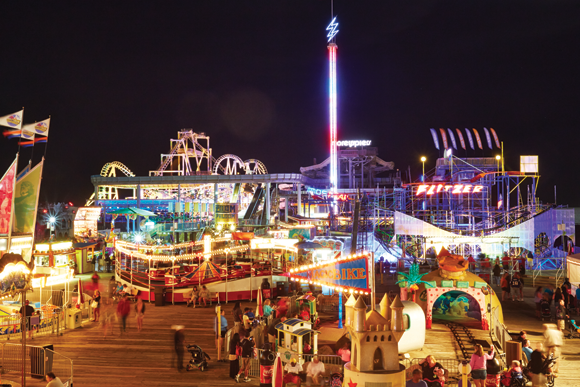 During the event itself, venues should assign one specific employee to cover it by taking photos and videos, Fillmore says. Otherwise, that staffer could get caught up at the event in another capacity, and the attraction would lose all this valuable marketing material.

For all of the events at Morey’s, Fillmore follows up immediately with a social media photo album and video recap, items that establish fear of missing out (commonly known as FOMO) in people who did not come, and show that the park made the extra effort.

“It’s the icing on the cake,” she says, referencing the “Gone to the Dogs” event. “Guests now get a great picture with their families and dogs.”

Along with posting right away, the photos and footage will be used for marketing the next year, Fillmore says: “We’ll tell them, ‘Remember how much fun you had? The puppy pool party is back.’”

Many attractions, like Morey’s, do not stay open year-round. However, during the offseason, Fillmore stays busy on social media, promoting holiday ticket sales, new rides and attractions, and highlighting employees who work behind the scenes, like their roller coaster mechanics. So even if the water is not flowing and the rides are not spinning, social media continues to hum along to help keep the facility top of mind for future events, she says.