I was fortunate to be among the first to explore Star Wars: Galaxy’s Edge when the new land opened at Disneyland Park in California this summer. Seeing the Millennium Falcon in all its “hunk-of-junk” glory and then getting to enter its cockpit and assume the starship’s controls for the “Millennium Falcon: Smugglers Run” attraction was, as you might imagine, out of this world.

But there is so much more to see and do in the deeply immersive Black Spire Outpost that awaits park visitors. As Scott Trowbridge, portfolio creative executive with Walt Disney Imagineering (WDI), said in a panel presentation before I and other journalists previewed the far, far away galaxy he and his colleagues created, “The land itself, with all of its attention to details and opportunities for exploration and discovery, is its own E-ticket attraction.”

A visit to Star Wars: Galaxy’s Edge is supposed to be about your Star Wars story. Sure, you’re probably aware that you could build your own lightsaber, sample Blue Milk, and knock down drinks at Oga’s Cantina. But, with a second outpost slated to open in late August at Disney’s Hollywood Studios in Orlando, Florida, let me help prepare you for your intergalactic adventure by sharing a few of the more under-the-radar things to discover on the planet Batuu.

No, you’re not losing your mind. That really is a dianoga creature (from the film, “Star Wars: Episode IV – A New Hope”) lurking in a rusty cistern above the marketplace’s water fountains. The sewer-dwelling beast periodically appears as startled guests take a swig of water.

It’s kind of hard to miss the huge barbecue pit in the center of the outpost, especially with the aroma of delicious smoked meat wafting through the air. But take a closer look. A smelter droid (like one in “Star Wars: Episode V – The Empire Strikes Back”) cranks a spit as a modified podracing engine sears a massive slab of “ronto.” You could order a tasty Ronto Wrap (pssst, it’s actually pork) at the adjacent food stand, Ronto Roasters.

You’re not going to wait in lines to take selfies with characters, as you typically may at Disney’s parks. But you might be able to intercept Chewbacca or Rey as they purposely move through Black Spire Outpost. Engage with them in character, because they’ll likely interrogate you about your allegiance to the Resistance (or, heaven forbid, the First Order). Take time to chat up the cast members throughout Batuu as well. They are encouraged to improvise and share their (fictional) stories about their lives in the Star Wars universe. 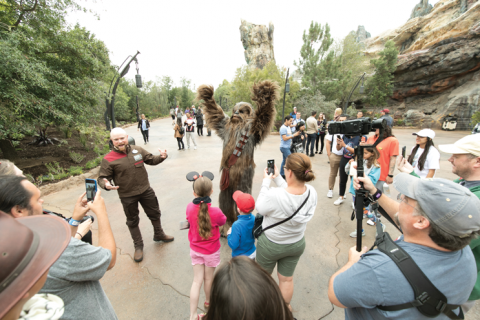 Seek out the necklace for sale at Dok-Ondar’s Den of Antiquities. If it looks familiar, that’s because it was made using the original mold that a European jeweler designed for the necklace worn by Princess Leia in the final scene of “A New Hope.” While you are in the Ithorian dealer’s shop, try to barter with Dok-Ondar, an interactive animatronic that literally talks out of the side of his mouth.

Whether or not your attraction has an acclaimed intellectual property, consider bringing immersive elements to your parks and attractions. Your guests will enjoy experiencing the environments you create.

I’ll see you at the parks. I’ll be the one doing a spit take as a dianoga interrupts my water break.

A lifelong park fanatic, Arthur Levine has been writing newspaper and magazine travel features about the industry he loves since 1992. He’s been the Theme Parks Expert at TripSavvy.com (formerly About.com) since 2002, and is a regular contributor for USA Today.