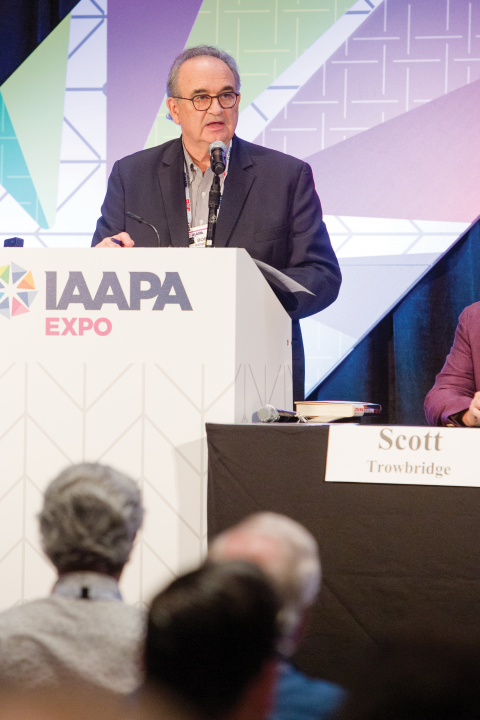 A galaxy not too far away is poised for growth.

The group of creative minds from Walt Disney Imagineering who joined “Legends 2019 – Report from the Galaxy’s Edge” session on Wednesday shared Star Wars: Galaxy’s Edge has more stories to tell.

“We’re looking into the future of storytelling for Galaxy’s Edge and any other activation in relation to Galaxy’s Edge above and beyond what you’ve seen,” said Margaret Kerrison, managing story editor who served as the story lead for Star Wars: Galaxy’s Edge. “This is something that we are really excited about.”

The Legends panel, moderated each year by Bob Rogers, ICAE, the chief creative officer of BRC Imagination Arts and IAAPA Hall of Fame member, is an annual favorite during IAAPA Expo. The session is known for honest conversation and insight from creative visionaries.

“We have advanced practitioners on the Legends panel who are leaders in their field—most of them have accomplished some really great things. And what do they know that they are willing to share that would help the rest of us,” Rogers said.

While the business side of the attractions industry is important, Rogers said the annual discussion decidedly focuses on art, craftsmanship, and the emotion creative lands generate.

“People had been dreaming about stepping into this world for more than 40 years,” said Chris Beatty, executive creative director for Star Wars: Galaxy’s Edge. To develop the dynamic space, Beatty said his Disney colleagues in operations, retail, and food and beverage were part of early conversations on how the new lands would look, feel, and smell.

“We thought different how we could be smarter, how we can make things easier, how we can get inputs quicker, and this is a great example of that,” Beatty said.

Trowbridge said a guide outlining design principles proved helpful for all working on the project. When a question arose on what creative direction to take, referring to the guide brought all parties back to the land’s foundation.

Designing for guests who may not be fully versed in the Star Wars universe was also taken into consideration. Anisha Deshmane, assistant producer at Walt Disney Imagineering, was responsible for guiding the development of interactive experiences, like Star Wars: Datapad. Part game, part communicator, and part guide, the smartphone app conveys a sense of personal storytelling as guests complete tasks around the land.

“It’s a new way of telling a story that had not been done before,” Deshmane said, adding that for the first time, guests could feel as if they were playing an active role in how their experience came to life.