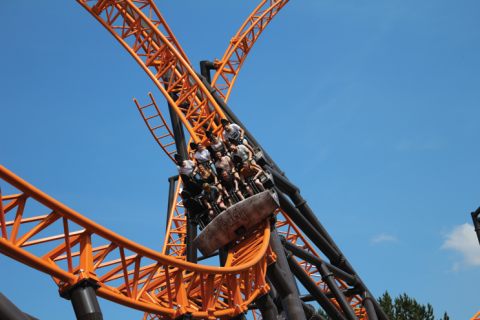 As a part of the largest investment in its history, Bobbejaanland rolled out a new steel linear synchronous motor (LSM) launch coaster the park says offers a world’s first: By means of a button on each rider’s safety restraint, riders can choose to experience the roller coaster forward or backward to start. Peggy Verelst, the park’s marketing and sales director, explains riders cast their ballots upon leaving the boarding station while traveling along a narrow piece of track before engaging a waiting turntable. “While the train moves from the station to the turntable, the guests can vote. The majority decides. This completely new feature is unique in the world,” Verelst says. Following guest input, the waiting turntable will spin in a direction that places the vehicles on the track facing forward or backward. If there is a tie, the option is selected automatically by the ride computer.

“Fury” then launches forward, before losing momentum and reversing direction. A second launch then propels riders backward up a spike where cars again lose momentum and launch forward a third time, leading into “Fury’s” top hat at a top speed of 106.6 kph. “Fury” then zooms along 600 meters of track. The ride reaches a height of 43 meters and features four inversions. At the end of the ride, a second turntable transfers the train to a piece of track leading back to the boarding station.

The coaster features two trains with three cars per train, seating up to a total of 12 passengers. The park says the ride is the highest, fastest, and steepest triple-launch coaster in the Benelux region.

The ride’s theming is based on the new Land of Legends park section where it’s located. The coaster’s backstory is that fire knights—the riders—are under attack by a dragon. The knights will try to tame the dragon, and they partially succeed. They stone the dragon, but it remains alive and dangerous. The coaster station is a stone castle, and the trains are themed as fire wagons.

“We are talking about the largest investment for Bobbejaanland ever,” says Verelst. “Not only are we building this great coaster, we are rebuilding a zone of more than two hectares. This area will offer a complete guest experience. We are convinced that by doing this, we will claim our position as a family attraction park.”