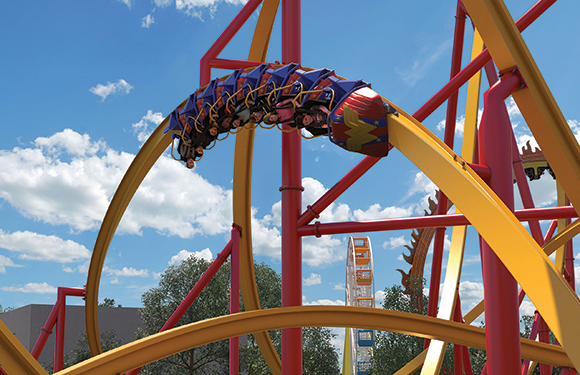 As 2017 winds down, Six Flags is placing its focus on all the new attractions coming to its parks in 2018, and suffice it to say, next year is shaping up as a whopper.

“This is our most impressive and ambitious new capital rollout ever,” says Six Flags Chairman, President, and CEO Jim Reid-Anderson. “Many of the rides and attractions we’re introducing next year are ‘world’s firsts’ and record breakers as we deliver fun-packed innovation at the highest level. Innovation is in our DNA, and our guests expect and deserve one-of-a-kind experiences when they visit our parks.”

Six Flags is opening new roller coasters at no less than five of its parks, featuring five distinct models. Even more significantly, one of these coasters—the “Wonder Woman Golden Lasso Coaster” at Six Flags Fiesta Texas in San Antonio—is a first-of-its-kind, single-rail coaster in which the trains fly along one I-beam track no wider than 15.5 inches. It also features a 100-foot drop with a maximum angle of 90 degrees, a 180-degree stall, two airtime hills, and a zero-gravity roll. Six Flags says this new design will give riders, seated single file, an unobstructed view as they zigzag along the park’s 100-foot-high quarry walls. 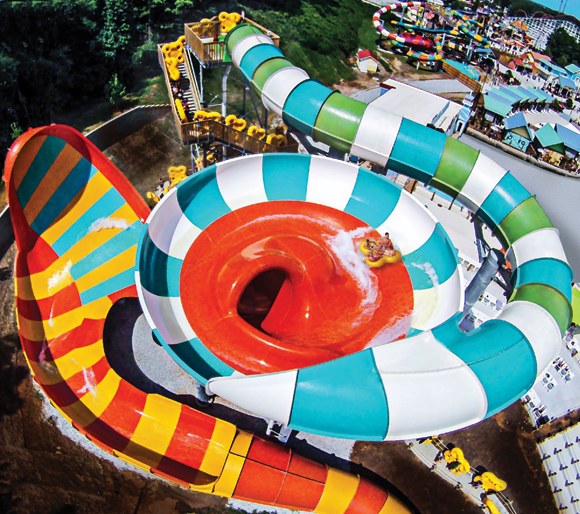 At Six Flags Over Georgia near Atlanta, a new hybrid wood-and-steel coaster, “Twisted Cyclone,” will stand nearly 10 stories high and offer a 75-degree initial drop into a reverse cobra roll. This is followed by three inversions along its 2,400-foot-long course, including a 360-degree zero-gravity roll. The coaster will feature custom coaster trains modeled after classic 1960s convertible sports cars.

The “Harley Quinn Crazy Coaster” at Six Flags Discovery Kingdom in Vallejo, California, is being touted by the park as the world’s first dueling, looping coaster. The ride’s track has a figure-eight configuration whereby its two trains simultaneously travel around the two loops and pass one another numerous times during these continuous inversions.

The “Wonder Woman Coaster” at Six Flags Mexico in Mexico City is a 4-D Free Spin coaster (referenced as Free Fly by Six Flags) similar to those installed at several other Six Flags parks the past three seasons. The ride lifts its eight-passenger cars 120 feet in the air via a 90-degree hill, and then as the cars roll down the back-and-forth looping track, the seats spin freely and turn somersaults.

Six Flags Great America in Gurnee, Illinois, will roll out “the world’s largest Loop Coaster,” which takes riders forward and backward around a huge, 100-foot-tall loop before suspending them completely upside down. The ride’s 32 seats are in a “faceoff” configuration, with guests seated back-to-back and face-to-face.

Rides themed on DC Entertainment’s characters Cyborg and Harley Quinn will debut at Six Flags Great Adventure in Jackson, New Jersey, and Six Flags Over Texas in Arlington. Called “Cyborg Cyber Spin” and “Harley Quinn Spinsanity,” respectively, both are inspired by movements of a gyroscope. They feature a triple-box design that allows a gondola to spin around three separate axes as high as 70 feet in the air. Riders are seated 24 across as they rotate forward, backward, and sideways. 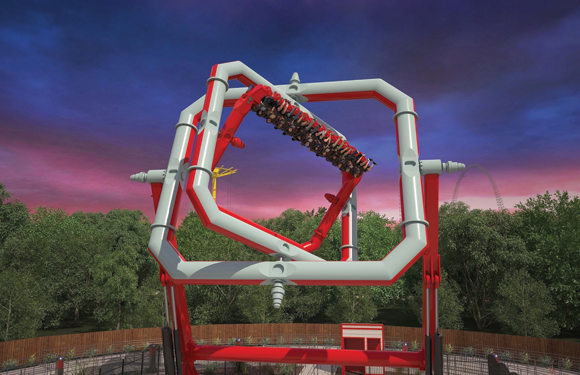 An enormous new water park ride will appear at Hurricane Harbor at Six Flags St. Louis in Eureka, Missouri. “Typhoon Twister” combines two extreme slides into one attraction as four-person rafts spin down a 125-foot-long whirlpool bowl that drops riders five stories. Then the rafts are propelled up a 45-foot, zero-gravity wave wall before coming back down and shooting out into a splash pool.