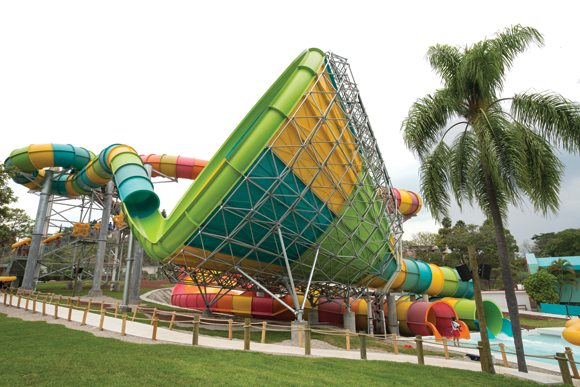 For more than 17 years, Six Flags Entertainment Corporation has operated a successful outpost of its popular theme park brand in Mexico City. Attracting visitors from across the country—and world—the team at Six Flags Mexico identified an opportunity to increase its presence in the market, this time through the Six Flags water park brand, Hurricane Harbor. Funworld spoke with John Odum, president of Six Flags International, to discuss what it took to increase the company’s presence in the region, the choice to double down within Mexico, and how the concept of Hurricane Harbor Oaxtepec came to life.

Since opening in 2000, Six Flags Mexico has seen steady year-over-year growth, catering to a region where families and friends seek out parks as a place to spend quality time together. As sustained popularity of the park continued to prove itself year in and year out, the team began to think of new ways—beyond the addition of a ride here and there—to provide even more variety and options to its visitors.

“We already had the most successful theme park in Mexico City, so we wanted to open a water park nearby to leverage that success,” Odum says. “Having a theme park and water park together in the same market has always been a core part of Six Flag’s strategy, and this was one of the few markets that did not have one.” 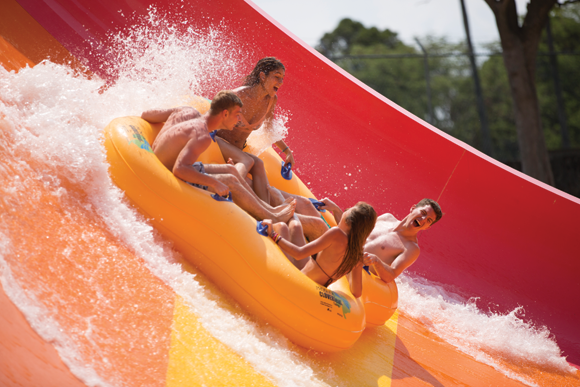 One of the benefits of being part of a larger organization is having a brand that already resonates within the market—and has proven itself in others. In 1983, Six Flags launched its first water park concept, WaterWorld near the former AstroWorld theme park in Houston, Texas. In 1995, the company took over Wet ’n Wild, located near Six Flags Over Texas, the company’s flagship park in Arlington. Soon after, in 1997, the park was rebranded Six Flags Hurricane Harbor, a concept that has been a success story for Six Flags for the past 20 years. “Hurricane Harbor is the same brand we have developed for all of our water parks,” Odum says. “It has already proven itself successful in North America, and along with its expansion to Mexico, it is also being developed in other countries such as China.”

Although Six Flags built some of its water parks from the ground up, the team also strategically took over pre-existing water parks, improving the infrastructure and attraction options to align with the Hurricane Harbor brand. The option to move in either direction allows the team the flexibility needed to help choose the most optimal locations in each of its regions. In partnership with the Six Flags corporate team, the Six Flags Mexico team began the search for a water park location close to Mexico City, from which the majority of its visitors came. After years of research and due diligence, the team decided to lease and renovate an existing water park, which had been closed for several years, in Oaxtepec, approximately an hour drive from Mexico City’s center. “Our research and feasibility studies determined that Oaxtepec’s proximity to Six Flags Mexico, along with the existing attractions, beautiful tropical climate, and, of course, the support of the local government, made this the perfect location to expand the Six Flags reach in Latin America,” Odum says.

Aside from location, existing attractions, and climate, one of the additional key considerations for the team was whether the park could be brought up to Six Flags standards without too much additional investment. “Our brand is the gold standard in Mexico, so deciding on the right location to invest in so that we could bring it up to Six Flags standards was key,” Odum says. “We conducted a market analysis and inspected the park very thoroughly, and with a reasonable investment, we were able to improve what was there and expand our portfolio.”

For Six Flags Mexico to take over the existing park, the company entered into a lease agreement with the city to reopen and operate the park, as well as add new attractions. The renovation project took approximately nine months and created hundreds of jobs in the process. “Eleven of the original attractions remain,” Odum says. “These rides were structurally sound, and we added state-of-the-art filtering systems—which allow 99 percent of the water to be recycled, meeting Six Flags’ standards—new paint, and new theming throughout to take advantage of the beautiful, natural landscape.”

Today, the 67-acre park offers one-of-a-kind water park entertainment for the entire family, including “Hurricane Bay,” the largest wave pool in the country, thrilling water slides such as “Anaconda” and “Twister,” as well as the all-new “Tornado,” which sends riders down a slide and then into a large, funnel-shaped tube before they land in the pool. Younger thrillseekers can enjoy hours of interactive water play in the new Splash Island, an area with a jungle gym set in the water that features smaller slides, water sprayers, and even a bucket of water that, once filled, will spill onto those underneath it.

Along with the new attractions, the team also ensured Hurricane Harbor featured its share of culinary options. The park boasts nine new eateries that offer a variety of meals—from Italian to American to Mexican fare—plus snacks and drinks. Finally, the park also offers exclusive Hurricane Harbor-themed merchandise at the new retail store locations on site. 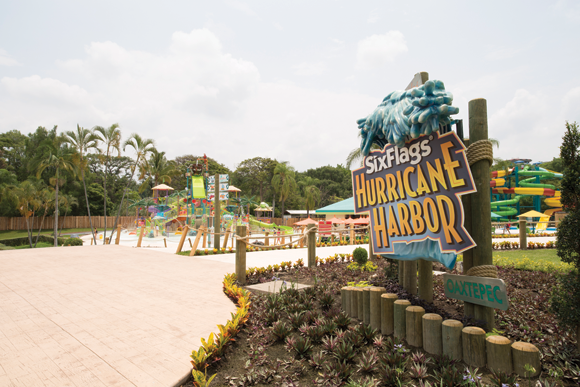 “Our long tenure in Mexico helps us understand the market very well,” Odum says. “We were able to take the established Hurricane Harbor brand and apply our existing management team’s local knowledge to make the park successful in the market.”

Odum notes the Six Flags Mexico team integrated the new water park into its marketing efforts, offering two parks on one pass for visitors: “We also wanted to expand our reach and penetration for season pass sales in the area, and with our ability to now offer access to two parks, we have been very successful, with sales up 40 percent. With the addition of Hurricane Harbor Oaxtepec, families in the region have even more entertainment options, making our season passes, which can be used at both parks, even more attractive.”

While sales and revenue growth are a key metric for the team, Odum says its true success will be measured by guest satisfaction scores, which are evaluated weekly. Based on the scores, the team can respond quickly to enhance the guest experience. To date, Odum says, Six Flags Hurricane Harbor Oaxtepec has received excellent scores from guests.