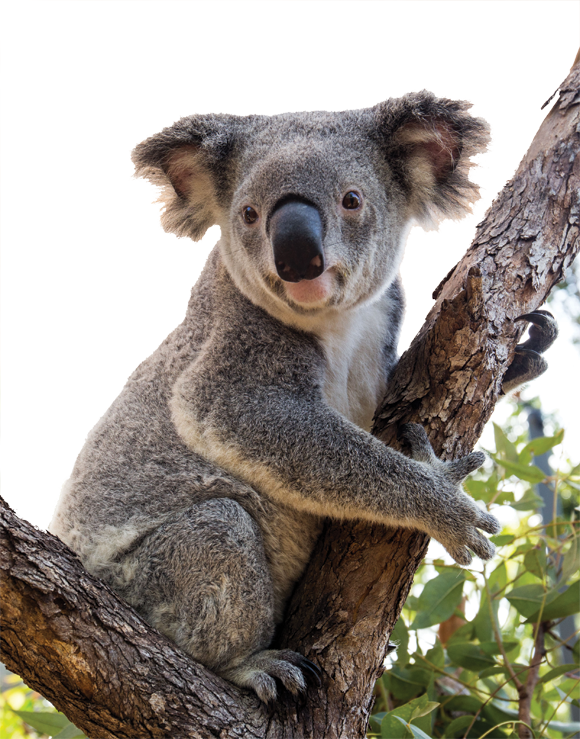 Despite a challenging year that has seen the profits of Australia’s biggest attractions companies take a major hit, a number of high-profile investments—by newcomers and established players alike—point to a region poised for significant growth.

More than A$2.5 billion in new projects are in the pipeline, while existing venues are spending aggressively to expand and introduce headline-generating rides. The largest endeavors  are being financed by Asian and Middle Eastern investors with local ties to the community.

“Australia is a multicultural country with beautiful scenery and unparalleled tourism resources,” says Songcheng’s Steven Wu, who is leading his company’s first-ever venture outside China.

“We feel very strongly that Australia is a great place to do business,” adds Bob White, a 40-year attractions industry expert who oversees more than half a dozen attractions including Warner Bros. Movie World, Sea World, and Wet’n’Wild as chief operating officer of Village Roadshow Theme Parks. “The demographics are fantastic. People make good money, and we’re right next to the fastest growing economies in the world. If you look at the long run, the future’s very bright.”

Australia welcomed 8.5 million international visitors in the year ending June 2017, up nearly 9 percent. Overseas travelers spent A$40.6 billion, with New Zealand and China by far the largest markets. At the same time, Australia’s economy has been growing consistently for more than 25 years, the longest streak without a recession of any developed economy.

These figures help explain why companies like Chinese giant Songcheng are bullish on building Down Under. 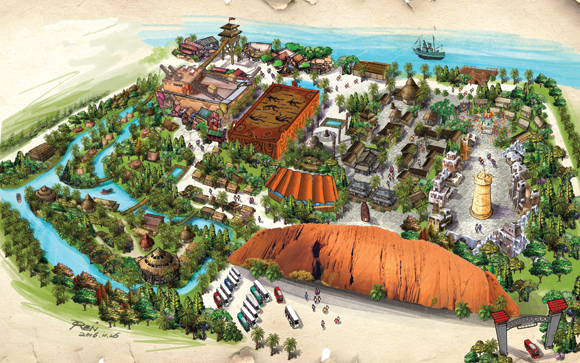 Songcheng Performance Development—named one of Asia’s “Best Under a Billion” by Forbes—operates 30 theme parks in China. But until now, it has never ventured overseas. The company chose Australia’s Gold Coast for the site of its first international attraction. It’s investing A$800 million in a new resort called Australian Legends World, slated to open in 2019.

“Over 13 million visitors from Australia and all over the world visit Gold Coast each year,” Wu says, citing statistics from the Queensland government, when asked why Songcheng chose Australia. “The theme park will serve as an essential window for visitors to learn Australian customs, and experience different cultures of the West and the East.”

The 2018 Commonwealth Games, to be held in the Gold Coast, are expected to catalyze the region’s tourism industry, as well.

Australian Legends World is “set to feature everything people know and love about life Down Under, but with an Asian twist,” reports Australia’s 9News. A replica of Uluru (Ayers Rock) is planned for the entrance, while inside there will be an adventure area, indoor skiing, Gold Rush Town, zoo, and 3,500-seat theater.

Songcheng anticipates 600,000 visitors in its first year, with attendance doubling within three years. Some 20 percent of the park’s guests are expected to come from China. Government approvals are still pending, but Wu expects construction to begin in the first quarter of 2018. 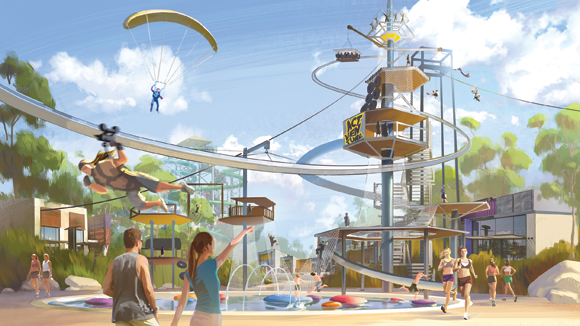 Travel four hours north of the Gold Coast, and you arrive at another oceanside area known for its beach resorts and surf spots: the Sunshine Coast. Bradley Sutherland, who grew up here but made his career in investment banking and property development in Dubai, believes his hometown is ripe for a major attraction.

“We see growth and development coming to the Sunshine Coast with new mega infrastructure projects like the new international airport, hospitals, universities, and a growing tourist base coming to the area from everywhere across the globe,” he says.

Sutherland’s company, Sanad Capital, is starting work on a A$450 million integrated resort called Actventure. Like Australian Legends World, it is scheduled to open in 2019. Sanad is an offshoot of a Dubai conglomerate.

Sutherland has also put together a “power advisory panel,” with the CEOs and founders of WhiteWater, Thinkwell Group, and Mereha to not only guide the Sunshine Coast park, but to make it a model for expansion to Asia, Dubai, and eventually Europe and North America.

Songcheng and Sanad’s resorts aren’t even the largest announced foreign investments in the sector. That honor belongs to Odyssey Parks and Resorts, which has billion-dollar plans to resurrect a Sydney amusement park called Wonderland Sydney that closed in 2004. Odyssey Parks CEO Ammar Khan—a self-made millionaire and property developer—used to work at Wonderland Sydney as a ride operator.

Khan’s initial plan to replace Wonderland Sydney has blossomed into a proposal to build “the largest theme park resort in the Southern Hemisphere.” Master plans for Worlds of Wonder call for two theme parks (one, fantasy; the other, adventure), two resort hotels (both with year-round water park facilities), and an entertainment and shopping district.

Odyssey Parks doesn’t want to create an “off-the-shelf”’ theme park, Bakas explains, but rather a world-class destination with Oz-type resorts and immersive attractions. After calculating the infrastructure costs to accomplish something like this, they realized a single park would not cut it.

Like its predecessor, Worlds of Wonder will be built in western Sydney. The area is changing rapidly, though, thanks to the construction of the city’s second airport. While the themed resort is still in its early stages with government approvals and financing pending, Bakas expects it to open by 2022.

Qualifying timelines with a note about permits is a common refrain from Australian attractions developers. As one company wrote Funworld: “Progress is always subject to the government’s approval of planning, construction coordination, etc.”

While Actventure and Australian Legends World appear to be on track to launch in two years and World of Wonders has the expertise and tenacity to realize its four- to five-year timeline, not every big project comes to fruition.

Look no further than a much-hyped A$500 million China Time park that was to be built about 75 minutes north of Sydney. After the company behind it couldn’t close the land deal, the project ended with a three-line public statement. A former town councilman, Bob Graham, told the local press he was not surprised: “As I said from day one, who was going to travel from China to Australia to see plastic pandas at a theme park.” 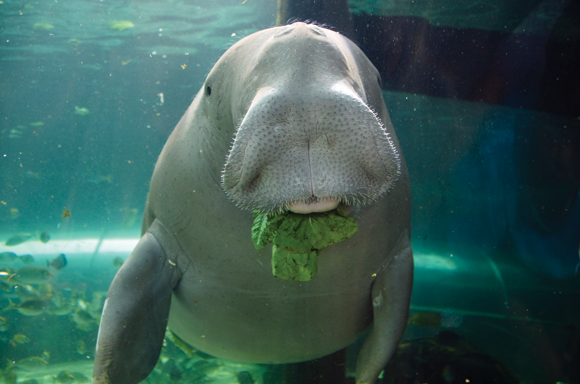 One of the latest additions to Australia’s attractions landscape is a Legoland Discovery Center in Melbourne, opened by Merlin Entertainments in April. The A$12 million facility—which includes a 4-D cinema, dark ride, factory tour, and multiple Lego building opportunities—is the 11th attraction the company opened or relaunched in Australia since acquiring the Sydney Attractions Group from Village Roadshow for nearly A$145 million seven years ago.

“Our ongoing investment in the area is certainly an indication to our commitment to the Australian attraction industry,” says Kristy Brown, head of PR ANZ for Merlin Entertainments.

While some Merlin brands, like Madame Tussauds and Sea Life, are universal, others like Wild Life and Tree Top Adventures are unique to Australia. Merlin owns and operates two ski resorts Down Under, as well. In addition, it is one of a dozen companies, including Ardent Leisure, Luna Park, Zipline Australia, and Scenic World, that are bidding for the rights to take over the famed Sydney Harbor Bridge climb. 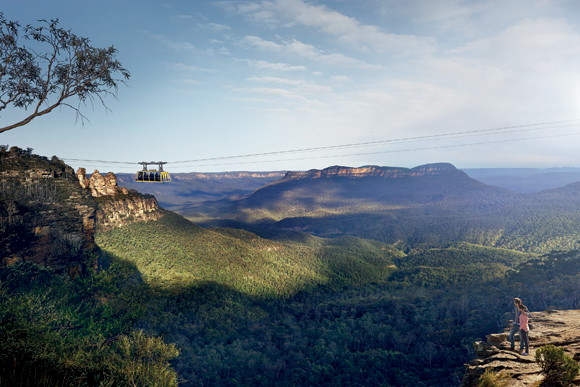 “Record numbers of Chinese and American visitors spending up big,” reads a subheading on News.com.au.

After nearby New Zealand, China is the biggest market for incoming arrivals. Other Asian countries—Japan, Singapore, Malaysia, South Korea, and India—account for A$7.5 billion in spending, according to Tourism Research Australia’s International Visitor Survey.

One such attraction is Scenic World, a 72-year-old family-owned business situated in Australia’s Blue Mountains. Travelers flock there to take in the breathtaking cliff tops, waterfalls, and rainforest canopy, and to ride the Southern Hemisphere’s steepest aerial cable car.

“International travelers are our dominant market,” says Scenic World Managing Director Anthea Hammon. “Natural experiences seem to resonate well. We’ve found there is a real appetite among our international guests for unique and authentic experiences that combine nature, history, and adventure in a way that caters to all ages.”

During the past financial year, Scenic World welcomed 1 million guests, the highest number since it started collecting data with a point-of-sale system 15 years ago. Nearly two out of every three visitors are from overseas. Chinese visitation is so strong—up 47 percent over the past three years—that the company has appointed a dedicated sales agent in Shanghai. It has also tapped Chinese social media sites and is one of the most followed Australian attractions on Weibo.

At the same time, the company is reinvesting and is in the midst of a 10-year master redevelopment plan. Four years ago, Scenic World spent A$30 million on an award-winning retrofit of its “Scenic Railway,” which, at 52 degrees, is the steepest passenger train in the world. It is now upgrading its “Scenic Skyway,” a horizontal cable car that travels 885 feet above ancient ravines, to reduce waiting times and increase the ride’s capacity by 30 percent. 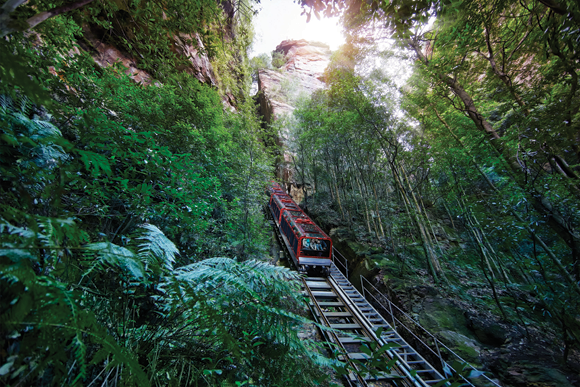 Scenic World is far from the only domestic player making major investments in the future.

“When you look across the industry, it would be very easy to say that between A$60-70 million is being invested in attractions over this 12 months,” says AALARA’s Eddy. “In a small market like Australia, that’s a huge benefit.”

This expansion takes place against the backdrop of a rough year, though, as Australia’s biggest attractions operators have been affected by safety concerns stemming from an October 2016 accident. Village Roadshow lost A$66.7 million in the financial year ending June 30, 2017, down from a profit of nearly $A16 million a year before. Ardent Leisure reported a drop of nearly 45 percent in core earnings for the same period.

“We have a bump in the road here that we have to get through,” says Village Roadshow’s Bob White. “But if you look past that at the long-term trends, they’re very good.”

“The Australian attractions industry has been through some significant challenges in the last year,” adds Scenic World’s Anthea Hammon. “As is the Australian way, though, I believe as an industry we are rising to face those challenges.”