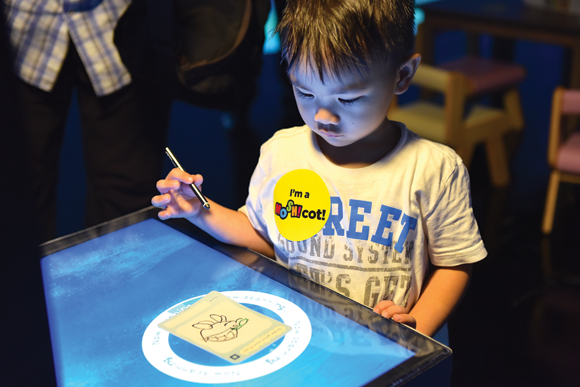 These are not the arts and crafts of your childhood. Inside Mosh!’s 337-square-meter play space, preschoolers draw between the lines—or just as often outside them—with colored pencils to animate fantastic creatures on paper. But then, thanks to a scanner and Ricoh technology, they watch their drawings enter a life-size digital world filled with white clouds and cartoon bubbles. Similarly, hand-drawn aquatic creatures come to life in the “Doodle Aquarium.”

Mosh! is one of more than 30 attractions on Singapore’s Sentosa Island, 21 of which are ticketed. Located in a building one level above KidZania Singapore and perched on the southern shore, parents and children in the adjacent Mosh! Cafe have a beautiful view of the Singapore Strait, as well as an ungated water-play area called “Palawan Pirate Ship.”

“Mosh! is created from the belief that imagination fuels innovation,” writes company founder Hitomi Komuro on Mosh!’s Facebook page. “Some of the greatest innovations for the past centuries have positively changed the way we lived and shaped our society to what we know today.”

Each of the five attractions inside the family entertainment center (FEC) encourages creativity and is fueled by some of Japan’s finest digital technology. In the largest corner of the room, preschoolers and their parents fold their best paper airplanes, then launch them toward a massive three-sided screen. At the moment of contact, the physical object becomes an animated aircraft—possibly a World War I-era fighter, a jumbo jet, or maybe even a virtual, supersized paper plane—flying through jungles or the Arctic.

Across the room, kids jump, skip, and fling their arms. Each action triggers animated fireworks against the backdrop of space shuttles taking flight, ringed planets, and earthly icons like the Eiffel Tower, Statue of Liberty, and Singapore’s Merlion.

Like Sentosa around it, Mosh!’s visitors are an even mix of locals and overseas travelers. On peak days, close to 1,000 people may pay up to S$28/adult and S$22/child to play inside the FEC for a couple of hours. Playtime is unlimited on most days, but a two-hour cap is put in place during busy times. 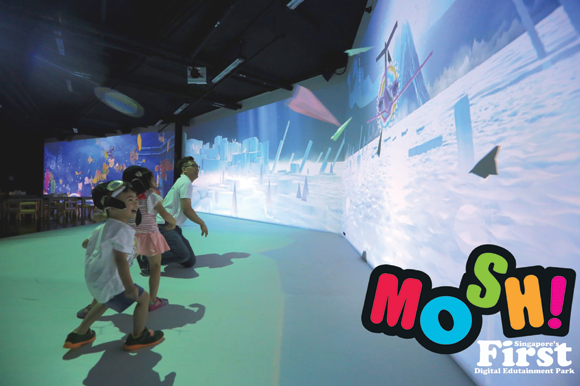 One of the biggest challenges the FEC has faced since opening nearly two years ago is a perception by some visitors, primarily locals, that the entrance price is too expensive.

“They expect a lot more than what they’re getting,” says Mosh!’s assistant manager of sales and marketing, Nasri Jamal, who explains that his company has taken the feedback to heart. An amicable young professional who joined Mosh! after working for its landlord, the Sentosa Development Corp., Nasri is building on his experience with Sentosa, launching preschool camps, developing signature holiday events, and conceptualizing new tours for the island’s historic Fort Siloso, where he once was a guide.

“We’re a really small company and stretched thin. To build this brand, it will take some time, so we try to bring in other alternatives first,” he says. “Because we have a small team, my intention is to find partners who can help us create content, so half the job is taken care of.”

One new partnership is with Newton Show, an international events company that produces science-themed content for children. Newton Show’s presenters use humor and fun, interactive experiments to teach young people scientific concepts. The shows are based on themes similar to the digital attractions in Mosh!’s play area: Air, Fantasy, Land, Sea, and Space.

During one class in the Mosh! Cafe, an instructor dressed as an astronaut prepares children for a trip to the moon. Participants strap on oversized “moon shoes,” thick, purple rubber bouncy sandals that mimic the feeling of low gravity. They eat sweet food from tubes and then head to the rooftop to launch a model rocket.

“This started as a hobby because my kids were interested in it,” says Yulia Marishchuk, who launched the company with her husband eight years ago in the Ukrainian city of Dnipro. “Classical study was quite boring for them, and there was nothing like this in the market.”

While Newton Show may have started as a side business, it has become a successful enterprise with more than 80 full-time employees, scores of part-time edutainers, and offices in five countries—the Czech Republic, Poland, Russia, Ukraine, and Singapore—plus plans to expand soon to Hong Kong and Australia.

In just the first four months of partnership, Newton Show and Mosh! have already produced more than 20 shows together. The collaboration enabled Mosh! to expand its market to include more primary school students in addition to preschoolers.

On top of these educational packages, Mosh! also developed birthday and corporate offerings to attract more groups. The latter opens a new market, while making use of the FEC’s facilities outside of normal operating hours, while the former is the product of collaboration with children’s party company PartyMojo and halal caterer Bellygood by TungLok. 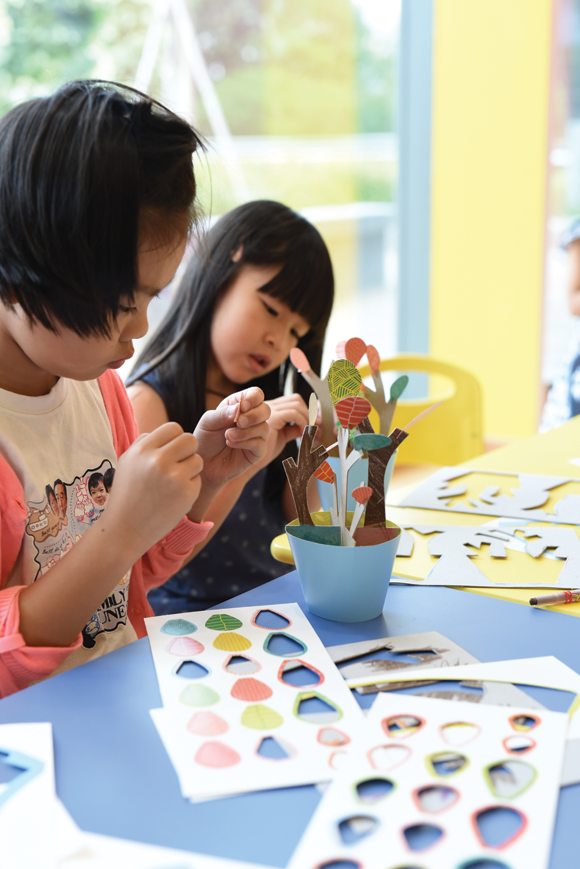 Back at Mosh!’s entrance, an ad for a rival FEC flashes above the ticketing counter, in rotation with Mosh!’s own pricing information and ads for items like Doof bean bags that can be found in the facility. Like Mosh!, Pororo Park Singapore is a relative newcomer to the Singapore market. It opened in November 2015, and bills itself as the “largest character-themed park in Singapore.”

“Everybody is a competitor, but everybody is a friend,” explains Nasri. “It’s better to work with people than to compete with them.”

Based on a popular Korean animated series, Pororo Park has a 1,022-square-meter space fitted with a children’s train, a theater for Pororo the Penguin and his friends to perform, an indoor play gym, and a variety of areas for role-playing, crafts, and photo opportunities. Located in a shopping complex near the city’s central business district, about 20 minutes away from Mosh!, Pororo Park’s newest hit is the “Hinoki Pool” filled with smooth wood pebbles from the north Asian Hinoki tree. The aromatic Hinoki is better known as the wood used in Japanese hot baths (onsen), but here, the “Hinoki Pool” is hugely popular with young kids who play in it as if it were a sandbox. 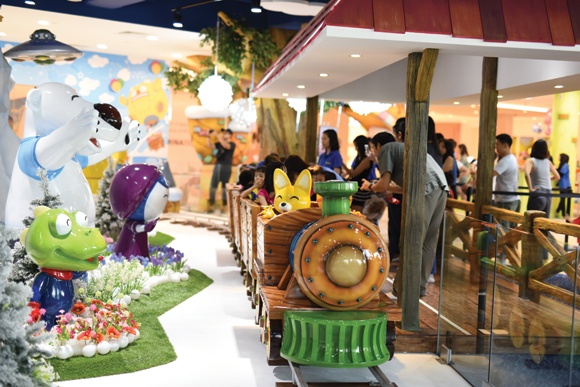 Pororo Park and Mosh! are marketing a combo package with 30-day validity at a rate that is about 30 percent off the normal ticket prices for a child with one accompanying adult.

Like Mosh!, Pororo Park has faced criticism about its pricing, particularly that of its S$750 annual pass. It has responded with a short-term promotion, offering three-month unlimited passes for S$199.

Listen to Your Customers

One of the biggest lessons Pororo Park Singapore learned over the past two years is the need to continually innovate and offer new content. Each month it rolls out a new theme for its daily crafts classes and other activities. Some are seasonal, like Halloween, Christmas, and a celebration of Singapore’s independence, while others are evergreen, like Safari Month, Under the Sea, and Dinosaurs.

The FEC is also updating its cafe, working for the first time with an external vendor to produce healthier options, as well as Pororo-themed foods.

For Mosh!, another important lesson has been to segment feedback from online forums, and then develop promotions accordingly. Locals prefer Facebook, while overseas visitors write TripAdvisor reviews. Facebook feedback has largely centered on cost, leading Mosh! to develop a range of targeted promotions for students, local credit card holders, and families who live nearby.

Nasri is optimistic these new promotions and partnerships will pay dividends for the FEC. “When I was a child, I think there were rarely any FECs at all. But Singapore is no longer the kind of place where you go out just for fun. Everybody is always learning. You go to have fun and learn something at the same time.”

While the market for FECs and edutainment is expanding, the bottom line comes back to implementation. “The success or failure all depends on how determined we are to do it,” he concludes.

Michael Switow is a Singapore-based journalist who covers the Asia-Pacific attractions industry for Funworld.