Universe opened under auspicious circumstances on 05/05/’05 at 05:05 in Nordborg, Denmark. It is a unique attraction that combines indoor and outdoor fun activities and rides with the goal of educating, inspiring, and sparking interest in science, technology, and entrepreneurship in guests. You could call it a multi-entertainment centre. It offers activities that can also be found as stand-alone attractions—from VR experiences over a museum to a rope course, a Segway tour, and digging machines, to a complete multimedia experience with a 360-degree LED screen.

Since 2010, the park has run seasonally. It is a nonprofit operation founded and funded by an entrepreneur to inspire kids to become entrepreneurs themselves. It is quite successful and has seen a 53% increase in attendance over the last three years, but is currently still not profitable without funding of a foundation.

IAAPA reached out to Jonas Luttermann, COO of Universe, to find out how the attraction managed the COVID-19 lockdown and how they are doing after reopening the gates on 13 June 2020.

The park employs 35 permanent staff members and by 4 April 2020 was supposed to open with an additional 120 temporary staff. About 60% of those are reemployed from previous years and 40% are new recruits. They had just finished the recruitment process and were about to start training when the government announced the lockdown of Denmark and they learned Universe would not be opening in April.

Universe had not signed contracts with potential new hires at that point; most of the permanent staff were furloughed and received 80% of their wage of the government under the condition they would not work from home.

To keep in touch with each other, Universe simply used a private Facebook group. According to Luttermann, the generation primarily employed as temporary staff doesn’t read emails and it is much easier to stay connected through Facebook. Short messages with updates provided all the information they needed.

By the middle of May the Danish government authorized amusement parks to reopen starting Monday, 8 June. Universe management decided to open the weekend after, on Saturday 13 June, even though the authorized date later moved forward to 27 May. While closed, Luttermann used IAAPA resources like webinars to get inspiration for procedures and best practices.

Attendance is generally low in Universe; on top days the park welcomes about 3.000 guests. With a surface of 56.000 square meters and the imposed rule of one guest per 4 square meters, Universe did not introduce a reservation system to limit their capacity.

When Universe opened, attendance was lower than previous years, but higher than expected due to the health crisis. After seven opening days, the attraction averages about 80% of 2019 numbers, so they are quite happy with the results.

Denmark is focusing on isolation, hygiene measures, and physical distancing. You will not find many face masks anywhere in the country. People who feel sick are encouraged to stay home and isolate themselves. Others are advised to make sure they are cleaning their hands as often as possible. To facilitate these rules, Universe installed 75 touchless hand sanitizing stations around the attraction. Before opening, the whole park and all the attractions are thoroughly cleaned. They make sure every surface/touchpoint is cleaned within a maximum of 4 hours.

Universe operates several virtual reality attractions and the headsets need to be sanitized after every guest puts them on their faces. Helmets that are worn on the Segway tour, on the other hand, are less sensitive. According to Luttermann, only staff handle the helmets and put them on the heads of guests. The guest sanitizes their hands before and after the tour. Guests don’t touch the helmets during the tour. The helmets do not come in contact with eyes, nose, or mouth, and therefore could be used by multiple guests.

Initially, it seemed like a good idea to introduce a virtual queuing system to limit physical lines in the park; so a local partner was found to introduce the technology to the attractions in Universe. Unfortunately, the system did not work as planned and limitations came to the surface quickly. “It delivered more pains than gains,” says Luttermann. “It was not dynamic and ride capacity is hard to predict. Guests are used to standing in line and keeping distance between groups. With the current COVID-19 restrictions, the capacity of rides is down and variable. With summer coming, where more guests are likely to come, our 15 years of experience in crowd controls is better than any app.”

The virtual queue is back on the shelf—Luttermann believes their audience is not digitally mature enough to use the an app this way. While the park looks for a better solution, Universe plans to create longer queue lines for rides and make sure guests stay happy in them by providing shade and entertainment.

If there are physical barriers and floor marks, guests follow the rules and keep distance between other groups, but as soon as they are in a free flow area, they tend to forget COVID-19 and don’t keep the required distance.

Surveys say guests are very happy with what Universe has done. Guests also say they are complying with the rules, but they are “neutral” toward other guest behavior. 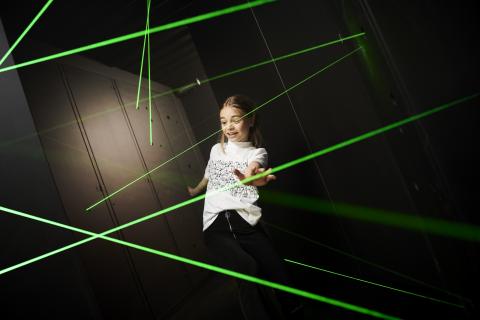 The Future of Universe

Soon the park will be heavily subsidized by the Danish government. The government decided to give a 50% discount to all Danish citizens who visit Danish museums, science centers, and zoos. This discount was announced without consulting the attractions themselves and does not amusement parks and water parks. Further details of the new government announcement are forthcoming.

In the further future, Universe will become part of a destination resort with 500 cottages, a water park, and more. From then on, attendance is expected to rise to levels that will make the attraction self-sustainable.

Universe has been a proud IAAPA member since 2006 and attends IAAPA Expo Europe regularly. You can meet their team at IAAPA EDUtours, the IAAPA Opening Reception, and the IAAPA Safety Institute. Say hi, next time you see the name Universe on an IAAPA badge!

For more information on navigating the impact of COVID-19, visit IAAPA's resource page.