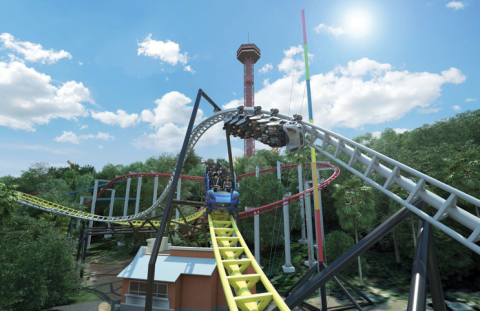 Park President Neal Thurman says a highlight of the coaster, created by Premier Rides, is an immersive real-time “pit stop” designed and produced by West Coast Customs—the world-famous automobile customization shop located near Hollywood, California, and the focus of multiple television series. Trains are timed to race alongside each other through the four launches and around a course designed for the park’s hillside terrain. They also speed over the top of The Underground, a new West Coast Customs-inspired area which includes new culinary and retail locations.

“Our partnership with West Coast Customs is a perfect fit as we have a shared vision of continually thinking outside the box while staying true to our core demographic,” says Thurman. “West Coast Customs is the premier vehicle-modification shop, internationally recognized for their original designs and beyond-your-imagination concepts. Add in their pop culture appeal, and it was an easy decision to partner with them and create a perfect union of two iconic Southern California brands.”

The coaster tops out at 55 mph and features side-by-side LSM launches, side-by-side airtime hills, and 14 track crossovers. During two laps around the track, riders will experience head-to-head racing with the other coaster train on the twin track. The pit-stop experience—where riders remain seated while in a holding area between laps—is narrated by Ryan Friedlinghaus, founder and CEO of West Coast Customs. The momentary break gives riders an inside look into the West Coast Customs shop, before heading out on lap No. 2.