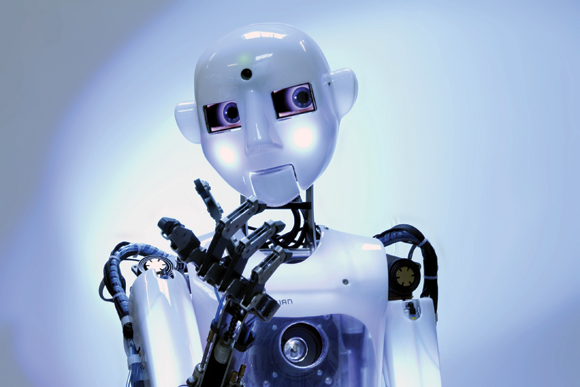 For a Limited Time Only

Permanent attractions like the new Pandora—The World of Avatar at Disney’s Animal Kingdom in Orlando, or time-honored works of art like the “Mona Lisa” at the Louvre Museum in Paris can compel hundreds of thousands of people to journey to their locations every year. But another way to entertain, educate, and enthrall the masses is to flip the script and bring attractions and exhibits directly to them via the traveling exhibition.

Adam Sanders is owner of Sanders Exhibition Services in Dorking, Surrey, England, which provides advisory and project development services, exhibitions for hire, and animatronic products for museums, science centers, and public venues. He sees some key advantages to traveling exhibitions over permanent exhibits: “I think they can be more cost-effective than producing your own, they can attract new audiences who might not otherwise come to your attraction, and they bring repeat visitors who might not come to a venue like a museum again.”

Imagine Exhibitions is headquartered in Atlanta and has offices in Paris, New York, Las Vegas, and North Carolina, producing hundreds of exhibitions around the world. The company has 32 ongoing displays, including the successful “Jurassic World: The Exhibition,” inspired by the 2015 blockbuster motion picture “Jurassic World.” The exhibition is currently in a six-month engagement at The Field Museum in Chicago until Jan. 7, 2018.

Tom Zaller, the company’s founder and CEO, says traveling exhibitions can have a noteworthy attendance impact for a venue: “With ‘Jurassic World: The Exhibition,’ we see significant incremental attendance, and when it was in Philadelphia [at The Franklin Institute], 70 percent of visitors said they’d never come to the museum before.” 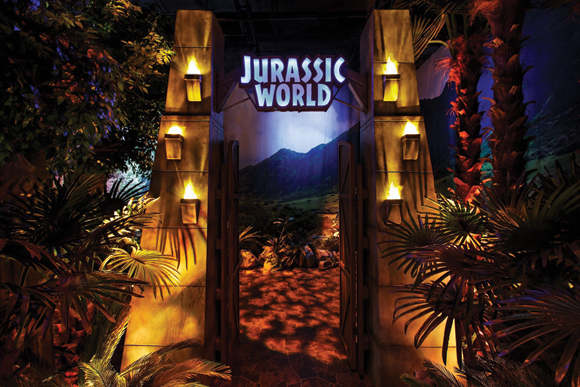 All of the companies contacted for this story agree the number of traveling exhibitions, as well as their overall attendance, are on the rise. Says Sanders: “It’s definitely growing and is hugely competitive because there are more science centers and a larger assortment of venues wanting them. There’s also an increase in popular culture exhibitions like Harry Potter, where a well-known brand is attached to an exhibition.”

“Harry Potter: The Exhibition” debuted in Chicago in 2009 and has traveled to Toronto, New York City, Paris, Sydney, Singapore, Tokyo, and other major cities. According to Sanders, who organized and managed the Paris section of this global tour, it’s been experienced by hundreds of thousands of people in each location. It’s a prime example of a popular entertainment brand driving the success of an international exhibition.

More recently, in December 2016, “Avatar: Discover Pandora” began its global tour in Taipei, Taiwan. The 12,000-square-foot interactive exhibition is a mixture of entertainment and education where guests are immersed in a variety of experiences, like exploring the wonders of space travel, learning about the Avatar program, and interacting with creatures from the movie.

Eddie Newquist is chief creative officer and executive vice president of Global Experience Specialists (GES), which is headquartered in Las Vegas, Nevada, and created “Harry Potter: The Exhibition” as well as “Avatar: Discover Pandora.” He says branded exhibitions aren’t the only ones in demand: “The international traveling exhibitions market is growing due to markets seeking new content and immersive experiences. The big brand-name exhibitions often generate the most press, but even smaller exhibitions are in demand as long as they promise something unique.” 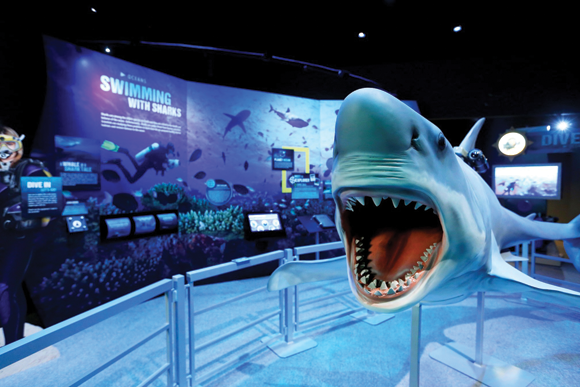 The growth and considerable success traveling exhibitions are enjoying beg the question of how their themes are chosen and their displays are created, and most importantly for attraction venues of all types is how to choose the right exhibition. “It’s critical to have a proven and successful track record in hosting events and exhibitions coupled with the financial capability,” says Newquist. “Without that level of expertise, the logistics, installation, and marketing can be challenging. Those factors can put a strain on any organization, so it is important to plan hosting an exhibition well in advance.”

“I make the decision of what exhibitions we create, and all my life I’ve gone on my gut instinct,” says Imagine Exhibitions’ Zaller. “With ‘Jurassic World,’ for example, I knew it was worth spending the money we’d have to pay Universal for a license and the amount of money to create this show because it has dinosaurs, which are evergreen, and this incredible intellectual property (IP). I felt comfortable taking a major financial risk.”

He says the next step is story development. The company’s creative director, John Zaller, writes a story for the exhibition that progresses to storyboarding. Next, the concept goes to fabricators for construction, unless there is an IP involved. In that case, the visuals have to be shown to the IP owners for their approval. “When you have a big IP, you already have public awareness,” Tom Zaller notes. “But, on the other hand, you have to work with the owners of the IP and what they want for their brand.”

Sanders points out that when a traveling exhibition is dealing with a museum, zoo, aquarium, or science center, those facilities must serve their institutional missions. Education is often a significant component of that. The “Wildlife Photographer of the Year” exhibition Sanders worked on, for example, resulted from an annual competition developed by the Natural History Museum of London and BBC Worldwide.

In the case of “Jurassic World: The Exhibition,” one of its features is a 42-foot-long Tyrannosaurus rex that walks and moves a car. But venues like The Field Museum demand more than entertainment value. “About half our exhibitions go into museums and science centers, and we have teams of advisers for all of exhibitions,” says Tom Zaller. “For ‘Jurassic World,’ we used Jack Horner, the well-known paleontologist who advised [Steven] Spielberg on the ‘Jurassic’ movie franchise. In each gallery, we talk about the dinosaurs themselves. ‘Jurassic World’ obviously didn’t really happen, but we have to keep the fans in the feeling of the story, yet also tell them the real science. If there’s anything in the science that we’re weak on, the museum can help us.” 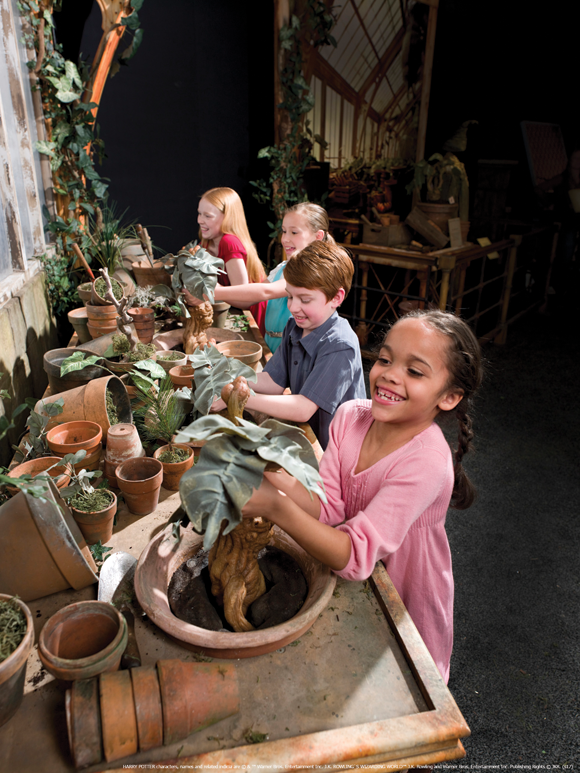 As noted, traveling exhibitions have some advantages over permanent exhibits, but they also present a few challenges to their proprietors and hosting venues. “A lot of it comes down to physical constraints,” says Tom Zaller. “You might be in 10,000 square feet in one city and 14,000 in another, and the venues present some of the most difficult aspects—size, location, setup. With ‘Jurassic World’ at The Field Museum in Chicago, they didn’t have the space for it, so we’re using a 20,000-square-foot tent for eight months that we built.” He reveals that transporting “Jurassic World: The Exhibition” requires 25 trucks.

The movement of these exhibitions to different countries can also involve some cultural issues. “From an exhibition creator’s point of view, they have to consider cultural differences and what may work in one country may not work in another,” observes Sanders. “Also, in the case of objects on loan from museums, there have to be experts traveling with the exhibits to care for the specimens that are on loan. There is also marketing for each market in which you’re exhibiting.”

Ownership of traveling exhibitions varies from exhibition to exhibition. Many are owned by the exhibition companies, while others involve joint ownership with museums and other institutions. “GES owns and operates exhibitions because we are dedicated to this industry long term,” says Newquist. “We work closely with our partners regarding exhibition content and messaging to offer the very best guest experiences. The industry and certain hosting partners usually target a 90- to 120-day exhibition run. [But] we have seen success outside of those time frames, and we work closely with our host partners to plan what will work best for them.”

Experts in traveling exhibitions give some of the advantages these expositions provide to venues and their guests:

“Traveling exhibitions are far less expensive than a permanent installation. These experiences provide something new and fresh to your guests. Exhibitions also give your members a reason to return.”

“After a science center or museum spends millions to open up and have great attendance the first couple of years, they then see that fall off. So how do they bring those people back? Traveling exhibitions can do this and keep the venue fresh for repeat visitors.”

“I think traveling exhibitions can be more cost-effective than producing your own. They attract repeat [visitation] from those who might not otherwise come again and can attract new audiences who might have never visited your attraction. Plus, they have more throughput and can put more people through per hour than a standard exhibit.”