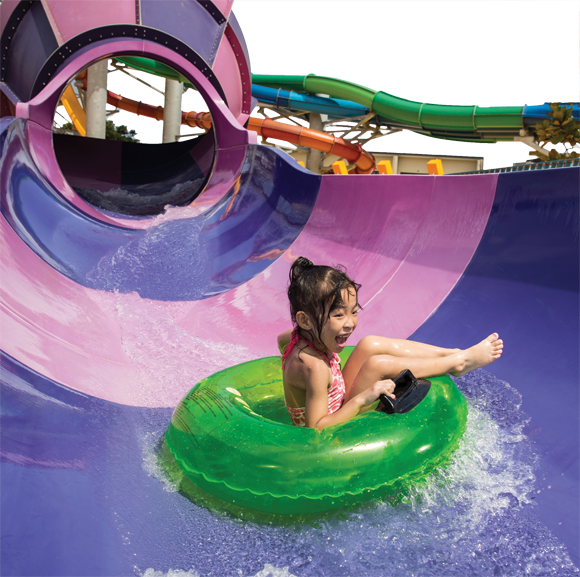 Young children smile and scream with joy as they slide down pint-sized versions of iconic ProSlide rides at Wild Wild Wet, a Singapore resort that recently doubled the footprint of its water park.

Located in an eastern district called Pasir Ris, far from the city’s better-known attractions, Wild Wild Wet is a social enterprise owned by a branch of Singapore’s labor movement, NTUC Club, which was established 30 years ago to “provide affordable lifestyle options for union members and the public.” The water park expansion is part of a broader five-year S$200 million redevelopment plan, in which NTUC Club has also modernized the resort’s 387-room hotel and built 135,000 square feet of new retail space.

“The challenge is to keep ourselves fresh,” says NTUC Club’s Lim Eng Lee, a 20-year veteran of the company who became its chief executive in September.

Over the past two decades, Lim witnessed and helped guide the attraction’s transformation. First, there were simply humble chalets used by union members for weekend getaways and their children’s birthday celebrations. Then, in 2000, NTUC Club added the Escape Theme Park, featuring go-karts, a pirate ship, a log flume, and the world’s last-fabricated Huss Maschinenfabrik “Rainbow” known for twirling riders in a nine-story-high circle. The first iteration of the Wild Wild Wet water park was added in 2004, followed four years later by the E!Hub—a 32-lane bowling alley, indoor family playground, and cineplex.

The most recent refresh began in 2012, when Lim and his team decided to scrap the Escape Theme Park, making way for a larger wet park instead.

“Basically, I think summer in Singapore is just too hot for a dry park. Generally, a water park has more repeat visits, as well,” explains Lim. “Singaporeans are more affluent, they are well-traveled, so their tastes have changed. Their expectation is pretty high. A small little water park, they won’t be very impressed, and, honestly, our first water park was really a small water park. If we don’t change, they’ll go somewhere else.” 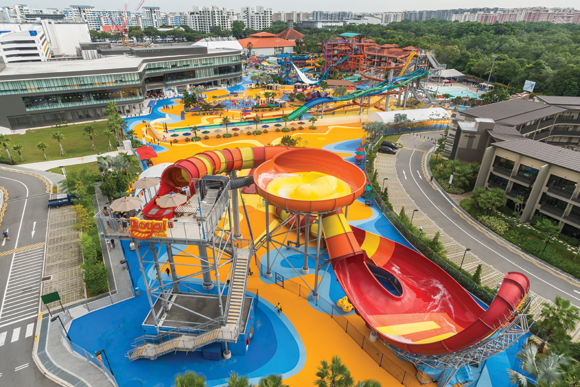 While Wild Wild Wet is still very much a family park, it also added white-knuckle rides to generate a buzz and cater to teens and young adults. The two hottest adrenaline-pumping additions are “Royal Flush,” fusing a ProSlide BehemothBowl 40 with a TornadoWave, and “Free Fall” featuring a five-story, 50-foot-per-second drop. Both provide bragging rights. “Royal Flush” is the first hybrid of its type in Asia, while “Free Fall” is touted as “one of Asia’s longest free-fall water slides.” Singapore’s first four-lane Kraken mat-racer and a high-speed, 360-degree ProSlide SuperLoop are also part of the expansion.

“The irony of it all is when I observe the headliner rides, people will look at it and say ‘Wow, wow, wow!,’ but many of them wouldn’t dare to go up. The ones that are very popular are the rides where the family rides together,” says Lim. “From my office, I’m quite happy to look down to see the kids are really enjoying all the kiddie rides. But we do need a few of the latest high-tech rides. We try to have a good balance.”

Before expanding, Wild Wild Wet’s management team surveyed other facilities across the region and traveled to North America to visit water parks there, including Canada’s largest water park, Calypso, where the team discussed maintenance issues, ride performance, and layout with operators. A determining factor in the team’s final ride selections was the quality of after-sales support.

The improvements are already paying dividends. Wild Wild Wet is on track to welcome 500,000 visitors this year, nearly double a year earlier, even though many of the new rides were not finished until recently. Company officials hope to grow attendance by another 20 percent in 2018. While the vast majority of visitors are Singapore residents—travelers currently account for just a sliver of capacity—NTUC Club is actively marketing the park in Indonesia, Taiwan, and Thailand.

Guests staying in the D’Resort hotel receive free access to the water park. “You come to our resort, you don’t just have a swimming pool,” Lim says with a smile. While local visitors tend to spend half a day in the park, overseas visitors stay on average for two nights. He hopes tourists can account for up to 40 percent of all water park visitors in the years ahead. 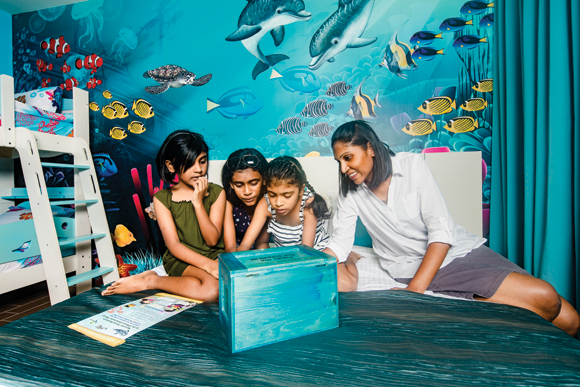 “In a business like ours, we always struggle with off-peak,” Lim explains. “So we’re taking steps to make our product more visible to tourists.  Previously, if we tried to market to tourists, they’d be totally disappointed. Today, while the park is still not that big, we think our product is good enough to market [abroad].”

To increase off-peak usage and generate new revenue streams, NTUC Club is also working with a company to design corporate team-building programs for the water park—combining traditional rope elements with the slides. It is also renting the facilities after hours to businesses that would like to hold nighttime product launches, award presentations, and parties.

Wild Wild Wet’s redevelopment led NTUC Club to change the way it markets the resort, as well. On the pathway outside, a poster encourages young couples to “add a touch of magic to your memories” by holding their wedding ceremonies in the D’Resort sky garden. Another poster encourages people to “turn moments into memories” by celebrating birthdays, baby showers, and anniversaries at the resort. 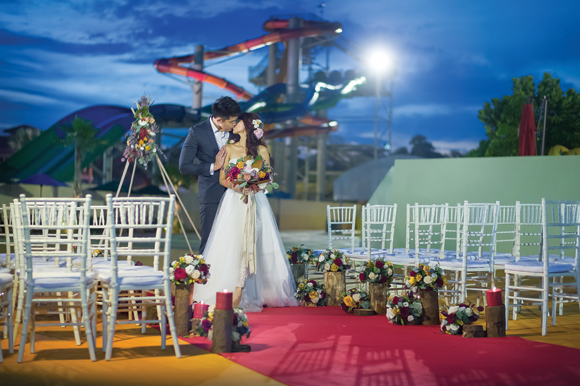 “Instead of selling rooms or water park rides, we’re trying to sell the experience,” Lim explains. “We realize many people come here to celebrate. There are end-of-year parties and birthday parties—particularly for 16th, 18th, and 21st birthdays. There have even been cases where a boy wants to propose to his girlfriend, and he engages us to help surprise her. So we realize the celebration market is an area we can tap, and we set up a team to expand this market. This is a directional shift.”

This shift applies not just to Wild Wild Wet and the D’Resort hotel, but also to attractions in the adjacent mall, like the eXplorerkid family entertainment center, which targets children ages 12 and younger, and even the bowling alley.

Lim is quick to point out the makeover of the water park is just one part of the whole, and that like Singapore’s more famous integrated resorts, Marina Bay Sands and Resorts World Sentosa, Wild Wild Wet’s balance sheet is best viewed within the context of the entire project. For NTUC Club, a popular water park makes the adjacent hotel and shopping center more valuable.

“Malls in Singapore are facing lots of challenges, with online basically replacing retail, so it’s very important, in my view, that the mall has attractions that are not replaceable by online experience. We’re probably the only mall that has a water park linked to it. So I think that is our competitive advantage, and we should leverage on it,” he says. “My ability to command good rental for the retail space is very dependent on the existence of the water park and the fact that we are part of a resort.” One fast-food company even went so far as to say it would not set up shop in the area, if not for the water park.

Profits in the retail space, meanwhile, plus new revenue streams from corporate and overseas visitors enable NTUC Club to keep water park tickets and hotel rates lower for its union members. “In our pricing strategy, we always put our members, not profits, in the center,” Lim concludes. “If we stop serving the domestic market, then we are not serving the nation.”