Tampa’s metallic cat is on the prowl.

“This is a ride to celebrate in every way,” says Stewart Clark, president of Busch Gardens Tampa Bay.

The park unwrapped what it’s billing as “Florida’s tallest launch coaster.” Using linear synchronous motors (LSM), the ride starts by catapulting riders forward, before trains reverse direction and rocket backward through the boarding station. After stalling on an incline behind the station, a forward launch then propels riders upward through the 150-foot-tall skyward surge, followed by an inverted heartline roll. 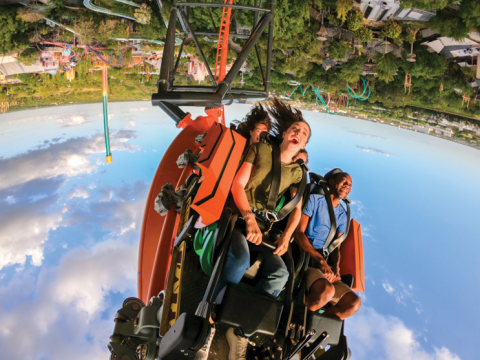 “I think it’s the most thrilling part of the ride because you hesitate for a moment and then slowly roll upside down,” Clark says of the roll maneuver.

With a top speed of 60 mph, the tiger-inspired orange and black “Tigris” includes 1,800 feet of track with several additional flips and turns before returning to the station.

“This is the most efficient launch system built to date,” says Premier Rides President Jim Seay. “Some of the riders have said, ‘It feels crisper; it feels faster.’” Seay concedes details of the innovations are proprietary; however, standing near the ride’s exit, he shares the ride’s structure is a new design, engineered for tropical weather conditions.

“This area of the United States has to deal with some of the highest force winds,” Seay says. “From a computer-based design, it’s technically a different ride.”

Located in the Stanleyville section of the park, “Tigris” occupies the spot formerly home to “Tanganyika Tidal Wave,” a shoot-the-chutes flume ride. In a nod to sustainability, design director Andrew Schaffer retained part of the former water ride’s trough and repurposed it as a walkway.

“The boats used to flow right through the new line area,” explains Schaffer. Clark is happy with his ninth coaster.

“We knocked it out of the park with ‘Tigris,’” Clark says.