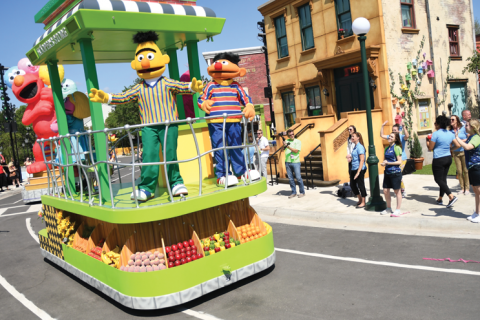 The lyrics to the theme song from Sesame Street have a new stanza: “Can you tell me how to get to Sesame Street?” can be answered with the directions of, “Just past Shamu Stadium.”

“We’ve built something here that is multigenerational. Families are going to love it,” says Amanda Trauger, creative development manager for SeaWorld.

Children and their parents who grew up on the iconic American television program can step inside Hooper’s Store, a set that leads to an extensive retail area; visit Abby Cadabby’s Garden, full of flowers growing in the Florida sun and home to one of the area’s many interactive touch screens; and Big Bird’s Nest, where the famous yellow bird makes appearances and reads stories. Meanwhile, it’s the famous 123 Stoop apartment building—complete with an Oscar the Grouch trashcan that speaks—that takes center stage. In all, there are 30 touchpoints to discover. But, how do Sesame Street and SeaWorld connect? Trauger says it’s simple: the two brands promote education and fun.

“We always want our guests to learn and grow while they’re here. And Sesame Street is another way SeaWorld is providing our guests a learning opportunity. It’s something we sneak in between all the fun,” Trauger says.

Several times daily, a fun parade featuring floats full of costumed characters rolls into the street of the new area. The parade music is a mix of ’80s cover songs and current popular tunes that children—and their parents—will appreciate. Once the floats stop moving, a street party atmosphere commences, where guests are invited to twirl hula hoops and blow bubbles with Sesame Street characters.

“Theme parks represent one of the most powerful ways for families to engage with and delight in the Sesame Street characters,” says Scott Chambers, senior vice president/general manager, educational media and licensing, North America with Sesame Workshop, the nonprofit educational organization behind the brand.

A rides area makes great use of the pre-existing attractions found in the former Shamu’s Happy Harbor area. All of the rides received new fiberglass theming décor by ThemeWorks to match their new Sesame Street character namesakes. Meanwhile, designers turned the Zierer children’s coaster into “Super Grover’s Box Car Derby,” with rethemed panels for the trains shipped from Zierer’s factory in Europe.

“We took something guests were already buying in our parks, and making it smart,” says Erik Baeumlisberger with SeaWorld’s creative team. “Not only is it a bubble wand, there are 11 interactive areas to engage with.”

Summoning a digital character to a façade window or getting music to play are all at a children’s reach with the wand.