Next year, Great Wolf Resorts will open a Great Wolf Lodge indoor water park resort in the third most populated market in the United States: greater Chicago. Called Great Wolf Lodge Illinois, it will be located in Gurnee and is scheduled to open in mid-2018. In announcing the company’s 17th indoor water park, Great Wolf noted it already has an established fanbase in the Chicago area that for many years has patronized its Wisconsin Dells lodge, about three hours away.

The lodge will open in a structure that previously served as another indoor water park, Key Lime Cove. But Great Wolf said it would almost double the size of the existing water park to 80,000 square feet and debut several new water park attractions, which are currently under development. The park will also feature popular branded attractions traditionally found at the lodges, like the “Fort Mackenzie” multi-level interactive water fort treehouse, the “Otter Run” twisting body slide, the “Alberta Falls” high-banking tube slide, and the “Crooked Creek” lazy river.

The resort will offer 414 suites of varying categories, sizes, and styles. The non-water-park portion of the lodge will feature more than a half-dozen entertainment options, including the successful “MagiQuest” live-action adventure game and “Oliver’s Mining Company,” where kids pan and sift for gemstones. Dining options will include Barnwood, a new restaurant concept that will feature small plates and craft cocktails. 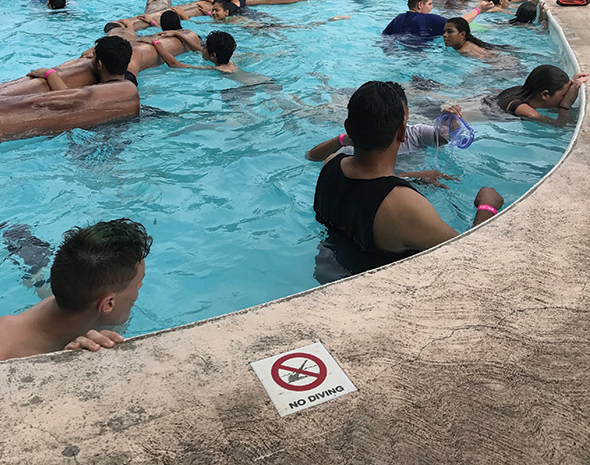 In an effort to promote the importance of water safety, all five Schlitterbahn water parks in the United States participated in the “World’s Largest Swimming Lesson” this past summer, joining around 600 simultaneously participating locations in more than 20 countries worldwide. The American Red Cross found that 54 percent of Americans cannot swim, and drowning is both the leading cause of death for children ages 1 through 4, and the second leading cause of death of kids under age 14. The World Waterpark Association started the “World’s Largest Swimming Lesson” in 2010 to help members of the global aquatics industry work together to raise awareness of the fundamental importance of teaching children to swim, thereby reducing the number of drownings.