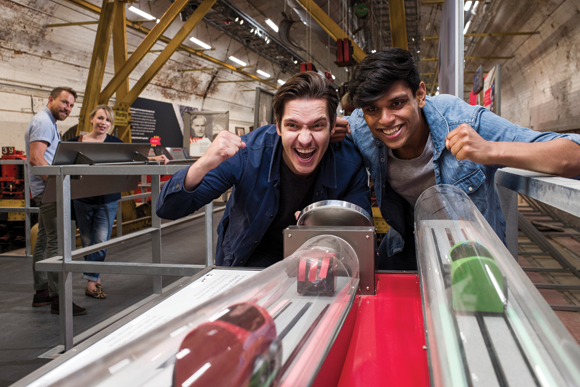 London’s new £26 million Postal Museum may be launching into one of the world’s most competitive markets, but it plans to stand out with a remarkable signature ride: “Mail Rail.”

The word “unique” is often bandied about in the attractions industry, but in this case, it is apt. The museum repurposed the 100-year-old underground railway—which once carried 4 million letters a day—into a ride that transports people instead of post.

“Mail Rail” delivers visitors into a secret, subterranean world that few have seen before now. “This is the real thing. You are not only in a ride, you are inside the heritage itself. There are plenty of museums where you can look at something in a case, but this is the actual, historical place. We are London’s only heritage railway,” explains Adrian Steel, director of The Postal Museum.

The driverless, electric railway was an engineering marvel, weaving its way around London Tube lines and linking sorting offices to mainline rail stations. It stretched for 6.5 miles end to end, with 22 miles of track in total. The tunnels, which run 70 feet underground, are only 7 feet in diameter in parts. “‘Mail Rail’ was like having your own giant train set to run,” says Ray Middlesworth, a former engineer who provides narration on board the ride. 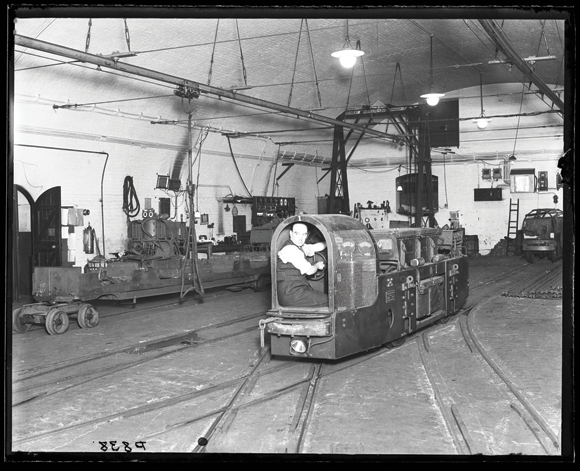 It took an enormous effort to bring the disused railway, which ran from 1927 to 2003, back to life in a visitor-friendly way. The “Mail Rail’s” entrance lies across the road from the museum in Phoenix Place. Visitors descend beneath London’s streets into the railway’s engineering depot, which now serves as a holding area and museum event space.

The depot was frozen in time when the line closed. “It was just like the workers had gone for their lunch break,” recalls Harry Huskisson, head of communications and marketing at the museum. The hum of engineers drilling, hammering, and singing in the ride’s accompanying exhibition is a neat touch. Around 220 people worked on the railway, and the exhibits convey their make-do-and-mend mentality and camaraderie.

Taking pride of place inside the depot are two brand-new, bespoke, miniature trains from Severn Lamb. These take passengers on a 20-minute journey, covering a one-kilometer loop.

Inside the dinky red and green carriages, it is cozy to say the least. Headspace is at a premium beneath the clear, bubble-style canopy, which protects heads and stray limbs throughout the ride. It is an extremely tight fit as the train trundles and tilts its way through the shrinking tunnels. Theoretically, each train can carry 32 passengers, but the museum is realistically aiming for 18 per train. That adds up to a daily throughput of 300 people per train (600 in total). Timed tickets should keep wait times under 20 minutes. Operators can flip the trains’ seats around so passengers always face the direction of travel.

Taller, larger, and less-mobile visitors may decide to skip “Mail Rail,” which cannot take wheelchairs, but there is a ride bypass facility with an accessible show.

The railway passes through stalactite-encrusted tunnels, past a train graveyard, floodgates designed to hold back the river Fleet, and sandbag traps to stop runaway trains.

Carriages pause briefly at two platforms, where 3-D projection mapping paints pictures across the semicircular walls. Passengers are first treated to a visual time machine, a montage of archive photography combined with animated illustrations showing how “Mail Rail” was the beating heart of the British postal system. The second stop focuses on the railway’s 1930s heyday. Passengers follow the progress of three letters, as well as the people they touched along the way. Centre Screen was responsible for the audiovisual shows.

The scale of the task The Postal Museum took on with “Mail Rail” should not be underestimated. Patrick Severn Lamb, managing director at Severn Lamb, remembers thinking, “‘It’s a narrow-gauge railway, how difficult can it be, compared to the other custom design-and-build projects that we’ve done?’ The reality of it doesn’t really hit you until you get down into the tunnels and then you think, ‘Gosh, this is incredible.’”

Severn Lamb’s team had to review and renew the track, deliver the electric battery-powered trains, and provide a communication, signaling, and tracking system. Everything had to be installed underground, in confined spaces, beneath the city of London, with all the safety and environmental challenges that entailed.

It took Severn Lamb several attempts to achieve the right train configuration. Twice, the team pushed a test rig, encased in polystyrene, through the tunnels, allowing it to chop and change the design. The company had to balance engineering requirements and visitor comfort with severe space restrictions, while preserving sightlines. The trains were brought down via shaft from the surface and then assembled on site. Three new fire exits had to be dug out.

The hard work has resulted in an “impressive” ride, says Patrick Severn Lamb: “It really does show what you can do with a bit of imagination, combining modern railway technologies and early 1900s tunnels, and turning them into an immersive guest experience.” 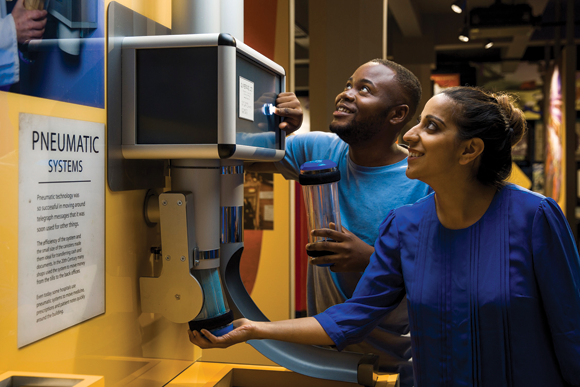 After a 19-year absence, The Postal Museum has a new London home in a converted printing factory, designed by Feilden Clegg Bradley Studios, an architectural and urban design practice.

Visitors who buy a general-admission ticket (£16) can choose to do the “Mail Rail” ride or the galleries first (a galleries-only ticket is £11). Admission to the “Sorted!” indoor play area located above “Mail Rail” costs extra: £3 with general admission, £5 without. Parents can relax with a coffee while children up to 8 years old practice being posties. Local parents wanted a place to bring their children, explains Huskisson: “We are providing a facility to the local community.” The team was keen to have positioned the museum as a place for Londoners and tourists.

The museum’s compact galleries are parceled into five interactive themed zones, leading visitors through centuries of innovation. Exhibits, such as listening posts offering oral histories, drive home the point that the postal service has been an important part of people’s lives. “It was the first social network,” says Steel. “Ever since the days of saying ‘Ugh’ in caves, people have needed to communicate. We’re shining a light on that need, and we have a 500-year-old story to tell.”

The colorful displays start with Henry VIII’s appointment of a Master of the Posts in 1516 and Charles I’s decision to open the Royal Mail to the public in 1635. Scarlet-clad mail guards carried flintlock pistols to protect their precious cargo. Besides bandits, one crew even found themselves under attack from an escaped circus tiger.

Visitors go on to learn about the introduction of the Penny Post in 1840 and how it made mail available to everyone. A priceless sheet of Penny Black stamps—the only one in the world—is one of the museum’s iconic exhibits. 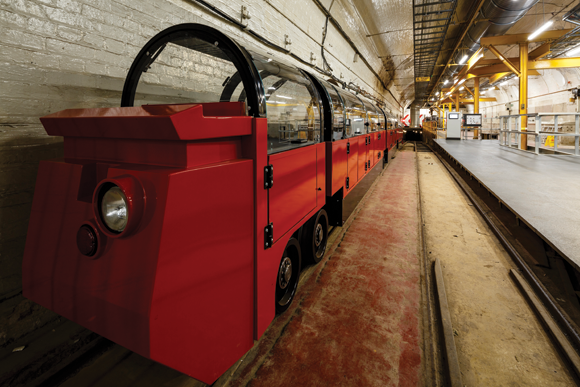 The galleries highlight the postal service’s design evolution. Exhibits include the original plaster cast of Queen Elizabeth II, an image that has been reproduced on stamps 220 billion times. Visitors can put their own heads on a stamp and e-mail it to themselves. A cinema screens classic documentary films such as “Night Mail,” made to promote the Post Office.

The postal service in times of conflict is another topic. Workers joined the Post Office’s own battalion in the First World War. Opponents used the post, too—a German soldier who found Captain Peel’s body wrote to his wife out of “a human duty to communicate you these sad news.” There are stories of republican attacks on Irish post offices, and suffragettes who posted themselves to Downing Street.

The galleries conclude by addressing the mail’s role in society. In a temporary exhibition called “Writing Home,” visitors can discover how letters have helped different people.  Examples include a victim of human trafficking, a soldier, a nurse far from home, and a father separated from his children.

“The experience at The Postal Museum and ‘Mail Rail’ will make you think twice when the post comes through your letterbox,” says Lindsay McGuirk, project content and design manager at hsd (Haley Sharpe Design). The company worked with The Postal Museum for five years on the project. 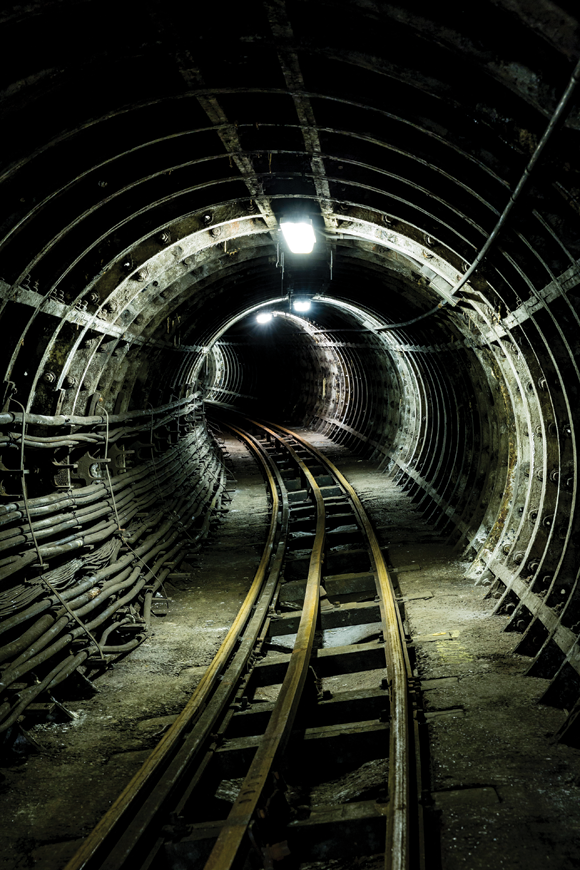 There is a sense of togetherness that runs throughout the exhibits. People can write and post messages to one another using pneumatic tubes that send mail speeding across the galleries. There is an opportunity to replicate the Post Office’s 1860s trials with pneumatic railways. Visitors can compete to turn handles that power mini pneumatic trains; the first train to the top of the track wins. Another physical interactive lets people team up, pulling and pushing levers on a reproduction switch frame to coordinate the safe passage of postal trains. “Each interactive is designed so that more than one person can use it at once. It’s a family experience,” says Steel.

Steel is hoping to welcome 180,000 visitors a year to the museum, which is backed by the Postal Heritage Trust and supported by the Heritage Lottery Fund, Royal Mail, Post Office, and a variety of donors.

After strong initial ticket sales ahead of The Postal Museum’s launch in July and “Mail Rail’s” debut in September, Steel is already looking ahead: “With any new attraction, there is often a dip after the initial hype. We plan to tackle this by making the most of the ride and the good reviews we hope to get. We are an excellent wet-weather day out. We’re setting out to grow our audience. We started off with the domestic audience in mind, and I would like to see the international audience grow. Change is good, and we are going to bring in a new temporary exhibition in February. We can also do so much more digitally here, both online and in terms of renewing the attractions we have built.”

But, for now, Steel is hoping the new Postal Museum and “Mail Rail” get the public’s stamp of approval.