New Rides and Attractions 2020: The Scream Machines of Summer

Shout it out: There is good news to share.

On horizons around the world, kinetic sculptures—designed to thrill, splash, and inspire—became part of skylines. These monuments of fun are reflections of how the global attractions industry rose to the challenge in a year like no other. Given the trials and tribulations of a worldwide pandemic, the need for laughter and screams of delight is greater than ever before. Manufacturers and suppliers worked closely (while still socially distancing) with owners and operators to bring to life these machines of joy. Chalk it up to resilience, perseverance, cooperation, and sheer luck that many new rides and attractions blossomed this year.

While the unpredictable circumstances shuttered several new additions around the globe, they continue to cultivate dreams of what’s to come. After all, good things come to those who wait—and we shall with great anticipation of the bright debuts ahead.

Funworld is excited to present a look at the new roller coasters, circular rides, water slides, dark rides, family rides, and shows that opened and welcomed their first guests in 2020.

The Scream Machines of Summer

A look at roller coasters debuting in 2020 “We were able to leverage The Hershey Company’s unique candy brands and assemble the finest ingredients to create ‘Candymonium,’ a one-of-a-kind hyper coaster that sets records for us at Hersheypark as the tallest, fastest, and longest coaster yet,” says Amanda Polyak, the park’s public relations manager.

Guests enter a candy-themed queue and approach three candy-themed trains, each representing one of The Hershey Company’s candies. Lightning struck with the opening of “El Relámpago” (meaning “lightning” in Spanish) at Mundo Petapa park in Guatemala City, Guatemala. Zamperla delivered a sensational coaster just before New Year’s Day 2020, where riders are treated to a vertical lift, a steep drop, and three inversions.

“We wanted to have in our park a roller coaster with a vertical upward climb and vertical drop because there were none in Central America,” says Maria Andrea Cruz, the park’s marketing and public relations director.

“The relationship between Zamperla and IRTRA is a long-standing connection that over the years has become increasingly consolidated, creating a stable and enduring relationship of trust, esteem, and respect for each other,” says Alberto Zamperla, CEO of Zamperla. So much so that Zamperla is currently at work on three additional rides at Mundo Petapa—a NebulaZ, a Demolition Derby, and a Super Flume are slated to open in December 2020, according to Andrea Cielo, Zamperla vice president of sales. Erlebnispark Tripsdrill is a combination theme park and wildlife park that made the bold move of opening not one, but two roller coasters in 2020. “Volldampf” is a small, 250-meter-long Family Boomerang from Vekoma Rides Manufacturing that is a fun first-coaster experience for small children at least 95 centimeters tall. The second coaster, named “Hals-über-Kopf,” is a thrilling 800-meter-long suspended coaster with three inversions that lives up to its name meaning “head over heels.”

Before making the investment in two rides, Tripsdrill looked at its existing ride portfolio that includes a wooden coaster, a bobsled coaster, and a launch coaster. “A suspended coaster was missing in our repertoire,” Helmut Fischer, one of the park’s co-owners, tells Funworld. “In order to reach a young target group, we decided to go ahead with this specific type of a roller coaster—a suspended thrill coaster—and integrated the family roller coaster ‘Volldampf,’ which crosses the track of ‘Hals-über-Kopf’ several times.”

The ride features four inversions and uses a lap bar restraint. “It gives you a completely new, unprecedented riding experience. You sit freely, are not squeezed between over-the-shoulder restraints, and can thus experience the journey under completely new conditions,” says Fischer. When Efteling decided a couple of years ago that it was going to retire its venerable 34-year-old bobsled coaster named “Bob,” the park wanted a new ride worthy of the older coaster’s heritage. “Max & Moritz” opened in June 2020, offering dual steel coasters with blue and green tracks, respectively. The coasters use “Bob’s” former Swiss-themed station building, where the two trains launch in opposite directions. The park says its main reason for choosing these dual coasters is their large capacity of 1,800 per hour.

“For many visitors, the ‘Bob’ was their first roller coaster experience,” says Fons Jurgens, Efteling’s CEO. “‘Max & Moritz’ is geared especially toward families with children between 4 and 10 years old with a height of at least 1 meter, so children can ride a real roller coaster with their family for the first time.”

The coasters are themed on the well-known German poem from 1865, “Max und Moritz,” by Wilhelm Busch, where the two namesake mischievous schoolboys live in a cute village with their mother, who makes cuckoo clocks. Her sons anguish the villagers with their tricks. When their mother locks them up for punishment in her cuckoo clock workshop, they escape in self-built soap boxes, where Efteling visitors escape along with them. 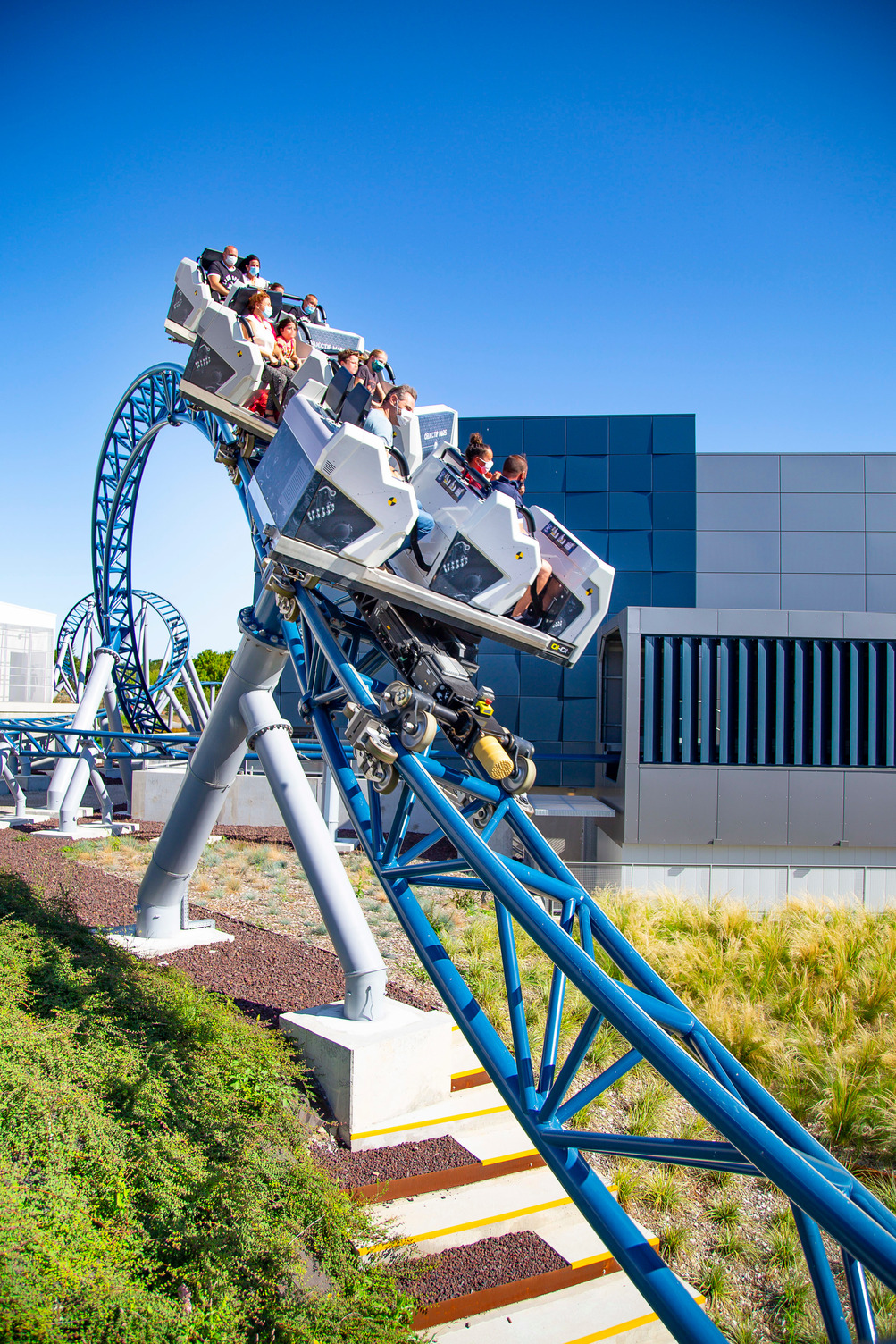 Simulating an out-of-this-world space flight over Earth, “Objectif Mars” (meaning “Destination Mars”) became the first roller coaster at Futuroscope in Poitiers, France, this season. With a height requirement of just 43 inches, the new family coaster recruits visitors of all ages to train as astronauts. Yet, with two launches, a drop track sequence—described as a “zero gravity test”—and cars that free spin, the attraction by Intamin packs thrills and surprises. The coaster begins like an indoor dark ride, using fire, lightning, and special effects to simulate space travel. Following an outdoor launch at 35 mph, vehicles rotate, allowing for a different experience each time.

“This is the biggest investment in an attraction since Futuroscope first opened,” says Rodolphe Bouin, chairman of the board of directors at Futuroscope, of the 20 million-euro ride. “Futuroscope has invested all of its in-house expertise and know-how in technology, set design, and storytelling in ‘Objectif Mars.’” With its bright blue track soaring into the sky, “Orion” at Kings Island became the seventh roller coaster in the world to cross the 300-foot barrier when it opened in July.

“Any time you open a giga coaster (a designation given to a roller coaster standing 300 feet tall), it’s an exciting season,” says Chad Showalter, communications director at Kings Island. The ride sports an impressive collection of statistics: The first drop stretches 447 feet—longer than an American football field; the second hill, a “wave hill”—where riders navigate the rise on their sides—stands 174 feet tall; while the third element rises 202 feet above the ground. “Orion” is also built for speed, reaching 91 mph. To distinguish “Orion” from the other six giga coasters in existence, Cedar Fair Planning, Design, & Entertainment, along with Daniels Wood Land, created an original backstory using the park’s history. Upon approaching the fictious Area 72 (a nod to Kings Island’s opening year), guests will overhear a radio broadcast by conspiracy theorists emerging from a dilapidated station wagon parked under “The Racer” roller coaster. As guests enter the Fort Mason Research Compound, they soon learn former rides at Kings Island—from the “SkyLab” circular ride to the retired “Vortex” roller coaster—were actually tests in physics, where “volunteers” (willing park guests) participated in ongoing “research projects.” Props in the queue include the former bases used in Kings Island’s royal fountain along International Street, now repurposed as faux fuel tanks. While the theming can create a feeling of nostalgia, Showalter says “Orion” is also perfect for creating new memories. “We want families to spend time with each other here and enjoying doing that,” he says. With five steel coasters already in its collection, SeaWorld San Antonio added a wood coaster in 2020. The new 3,379-foot-long “Texas Stingray” features 16 airtime moments and a 100-foot-long tunnel, with a support structure made of steel. Adding an animal name to the coaster follows a tradition at the park.

“All of our attractions have some sort of animal or conservation tie-in,” says Chuck Cureau, the park’s marketing leader. “We partnered with the Harte Research Institute for Gulf of Mexico Studies at Texas A&M University—Corpus Christi to provide insights into the Texas Gulf, home to many stingrays, when we created this ride. The decision to build a wooden coaster for 2020 was based in part on guest input, industry trends, and market needs.”

In April, Xuzhou Paradise launched a new coaster that should immediately put it on the map in China. The yet-to-be-named ride is the same model coaster as the renowned “Blue Fire Megacoaster” at Europa-Park in Germany. Maximilian Röeser, marketing manager for Mack Rides, says the launch coaster proved so popular in Germany, the same model will be attractive to guests at Xuzhou Paradise.

“Many families worry about doing a looping roller coaster, but with our statistics from Europa-Park, we can prove that you’ll find all ages on this type of coaster,” says Röeser. “We believe it is the combination of launch, inversions, speed, and airtime that create an outstanding roller coaster.”