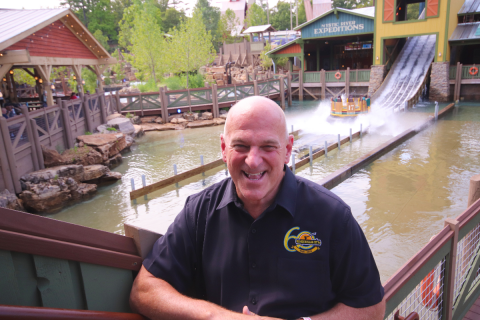 Story and photos by Scott Fais

The date marked 60 years to the day that Silver Dollar City opened in mid-America’s Ozark Mountains. Yet on its anniversary last spring, the Branson, Missouri, theme park kept its gates closed. A celebration years in the making would need to wait as the attraction remained shuttered out of an abundance of caution following the spread of the coronavirus.

However, COVID-19 did not stop Thomas, president of Silver Dollar City Attractions, from bringing together the 45 employees still at work inside the locked gates for a blessing.

“In a prayer that day, my voice cracked,” Thomas recalls. “The men and women gathered on the square recognized the weight that on May 1 … we had no earthly idea if, or when, we would open in 2020.”

It’s an opening day tradition that Thomas will ascend the steps of the park’s gazebo stage to offer a prayer for a safe operating season. The gravity of what the closure represented was only momentarily lifted by the arrival of oversized cupcakes bathed in thick icing and the socially distant “air hugs” the staff gave each other from 6 feet away.

“It was not the celebration we thought we would have,” Thomas says in a somber tone of the 2020 season—a year that saw the introduction of a towering new river raft ride. However, Thomas’ voice gains strength when he reflects upon the legacy of support.

“We’re a company that was founded by a loving family, who loves our guests and loves our employees,” Thomas says of the company Hugo and Mary Herschend first created when offering tours of Missouri’s Marvel Cave six decades ago. Their two sons, Jack and Peter Herschend—members of the IAAPA Hall of Fame—would continue to invest in the park and lead with love, ultimately creating Herschend Family Entertainment. Today, the company owns Silver Dollar City; operates Dollywood in Pigeon Forge, Tennessee, in partnership with entertainment legend Dolly Parton; owns Wild Adventures in Valdosta, Georgia; and owns and operates several dinner shows, aquariums, and resorts across North America. With all the growth, one thing never changed, according to Thomas.

“Through all of the challenges, there is a peace in knowing we’re loved,” Thomas says.

The affection for people and preservation of the human spirit are the foundation of Thomas’ leadership style that can best be described as leading with the heart.

Thomas has served Silver Dollar City for 30 of its 60 years, working as a merchandise manager, director of special events and festivals, general manager, and now president of the group that includes Branson’s White Water water park and Showboat Branson Belle excursion and dinner cruise.

“Every day for 30 years—and I do say this—I have been proud of this family,” he says without hesitation. “We are not perfect by any means, but in 2020, with the global pandemic, I have never been prouder.”

Poised to open for the 60th season on a Tuesday in mid-March to take advantage of Missouri’s spring break school holiday, Herschend Family Entertainment made the decision to delay the season just five days prior.

“There were a lot of conversations leading into those hours before that decision,” Thomas remembers. With the call made to pause the 2020 season, the park’s human resources team worked through the weekend to notify Silver Dollar City’s 1,500 seasonal employees not to report for work on opening day. Food and beverage managers stopped orders, merchandise managers canceled deliveries, and even live entertainment managers changed contracts of performers when spring shows were scrapped.

“Every single piece of our operation was impacted,” Thomas says. “At that point in March, the pandemic was starting to emerge. We believed we would be down for two or three weeks.”

As weeks turned to months, Thomas retained a core group of employees who began working toward how Silver Dollar City could reopen safely. Measures included requiring reservations for entry on peak attendance days, adding temperature checks for employees and guests upon arrival, making face coverings mandatory, and placing hand sanitizer stations at each attraction, as well as putting physical distancing markers in queues to remind guests to keep 6 feet apart.

“Nothing about this pandemic has been textbook. This is uncharted territory for all of us,” Thomas says. “Once we had protocols in place for safe experiences, that’s when we made the decision we would be able to open.”

Under Thomas’ leadership, Silver Dollar City became one of the first theme parks to reopen in 2020 on June 13. White Water opened on June 15, and the Showboat Branson Belle reopened a week later. Through the uncertainty and scramble to reopen, Thomas says he felt quite a bit of anxiety. Yet, he was bolstered by the solutions found by Silver Dollar City’s employees, referred to as “citizens.”

“Silver Dollar City’s culture is that we listen to each other and make decisions together,” Thomas says.

The park—known for its 1880s theme—features 40 rides, live shows, 100 resident craftsmen (think pottery, glassblowing, and iron goods forged by blacksmiths), all of which sit atop one of Missouri’s deepest caves. Spread across Silver Dollar City’s 100 acres, guests will encounter custom signage adding to the atmosphere. Each authentic-looking sign sports the name of an employee who has served the park for 25 years.

“The foundation for leading with love is recognizing every single person is important,” Thomas says. That, in part, rewards the longevity of dedicated citizens—from front-line workers to executives—regardless of their role with a personal sign.

He is quick to salute the efforts of his entire team, modestly saying the face of Silver Dollar City is the park’s talented citizen employees.

“We are all created with different gifts and personalities—we’re not all in the same box,” he says. “We have to respect each other’s differences and love each other with those differences.”

One difference Thomas appreciates is the cooperative nature of the global attractions industry. “In many industries, if you work for a competitor, they’re the enemy,” he says. “In our industry, we share information. We may not share confidential plans, but we work to make sure each of us stays safe for our guests and our employees.”

Thomas is very cognizant that on any given day, his facility will be called upon to serve a different demographic of park guest. From 2-year-old children looking for a romp to empty nesters wanting a slow stroll, each age group will use the park differently. Therefore, Silver Dollar City programs its operating season (traditionally running from late March through New Year’s Day) with events tailored for different age groups.

Spring break weeks are full of families; April tends to attract older adult couples once schoolchildren are back in the classroom.

“They have a little bit of a different expectation of their day than, say, a young family would,” Thomas says of senior visitors. Therefore, spring entertainment options include acrobat shows designed to impress, barbecue sampling to delight the taste buds, and bluegrass music that can be enjoyed while lounging. In summer, the “Moonlight Madness” event extends park hours until midnight, attracting families and the thrillseeker crowd. Of the seven roller coasters at the park, none can be seen while strolling the park’s walkways. By design, each is hidden behind trees or decorative structures. This prevents the festival atmosphere from being interrupted by scream machines.

Come September when school is back in session, older adults return for “Southern Gospel Picnic” and “Country Music Days,” before families flock for October’s “Pumpkin Nights.” Thomas says the park’s autumn festival—known for its glowing, oversized pumpkin sculptures—doubled Silver Dollar City’s attendance in 2019 over the previous year during the same five weeks. The secret?

“We dig through research of what our guests like,” Thomas says. That includes surveying guests and making a list of what he calls “sacred cows.” Again, leading with the heart, the list of emotional connections to the park are considered “nonnegotiables.” Each will always hold a spot at Silver Dollar City. These include singing hymns or making time for quiet reflection in the Wilderness Church, devouring fried chicken, or climbing aboard the steam train for a ride through the Ozarks.

Thomas recommends leaders know their own nonnegotiable elements—and share them with their team—so everyone can make sound business decisions.

To guide his staff in the needs and wants of guests, Thomas has implemented what he’s dubbed “the master plan.” The outline guides additions, renovations, refurbishments, and retirements of rides, equipment, and revenue-generating locations.

Thomas ever so slightly pulled back the veil of secrecy to give Funworld a peek on how the document comes to fruition.

“We say, ‘Here are our efficiencies, and here are our deficiencies,’” Thomas shares about the exercise in determining what to introduce next. “That’s how we start our master planning process.”

In the past eight years, Silver Dollar City has introduced $100 million of capital improvements. In 2020, that included a new river rapids ride from R.E.S., Barr Engineering, and Herschend Family Entertainment Corporate Development. Named “Mystic River Falls,” the $23 million ride features one of the tallest drops on a river rapids ride, a half-mile channel of roaring white water, an 82-foot-tall rotating elevator, and a six-story-tall elevated flume. The ride anchors a refreshed Rivertown area that also includes the new $4 million Rivertown Smokehouse, which serves brisket, pulled pork, smoked sausage, smoked turkey, ribs, and roasted chicken—all smoked and roasted on-site. While the ride and restaurant were marquee parts of Thomas’ master plan, the addition also solved a challenge for the park: a lack of seating for diners. The roughly 400 seats introduced along the banks of “Mystic River Falls” join an additional 300 seats created in 2018 near the “Time Traveler” spinning ride.

“The new Rivertown area certainly has fingerprints that will change the brand of Silver Dollar City,” Thomas says.

Leading by using the master plan, his team reimagined the area when a former river rapids ride on the same location needed expensive repairs.

“By the time we would spend the money to refurbish or rehab ‘Lost River of the Ozarks,’ nobody would ever know we would have done anything,” Thomas explains. “It would not sell one more ticket, and it would probably be a bandage, and we would have spent millions of dollars to fix it.”

By retiring the former ride and starting over, the park created an opportunity to have a new ride that would be marketable and would attract families stretching from Texas to the Great Lakes region.

“As we look to the future of Silver Dollar City, we know we need unique attractions that are motivational to get guests to travel miles past other parks along the way,” Thomas says about the park’s rural location in southwest Missouri.

His master plan includes new attractions that span the next decade, but Thomas stopped short of sharing what’s next.

“Those will be future announcements on a big day in the future,” he tells Funworld with a coy grin.

And while Thomas prays May 1, 2021, will be different than last year, one thing will never change in the leader’s opinion.

“We are always going to do everything within our power to keep our guests and employees safe,” Thomas says .