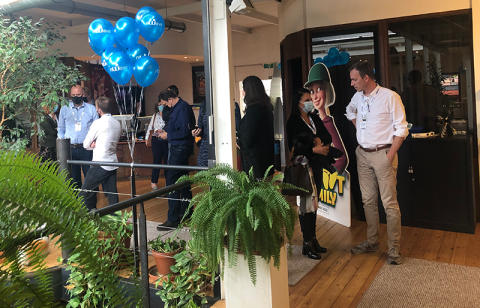 In October, the doors of nWave's animation studio in Brussels, Belgium, swung open to welcome IAAPA members into its colorful universe for a Meet IAAPA Europe, Middle East, and Africa (EMEA) event. Due to the ongoing pandemic and its restrictions on capacities, attendance was limited to 30 attendees who came from Belgium, the Netherlands, and France, representing attractions companies from around the globe.

nWave Chief Operating Officer Matthieu Gondinet kicked off the event by introducing the company through a trip back in time, explaining nWave’s origins and how it has grown through the years. Founded in 1994, nWave started with producing ride simulation films. Its success funded the studio’s first animated feature film, “Fly Me to The Moon,” in 2008, and nWave has continued to innovate with the creation of attraction films.

Gondinet’s presentation was followed by a showing of 3D projections from a ride simulation film, an attraction film, and a giant screen film trailer. Attendees were also treated to an exclusive teaser of nWave’s upcoming animated feature film, “Chickenhare and the Hamster of Darkness.”

Line Producer Vincent Philbert provided an in-depth overview of nWave’s film production strategies, showcasing the techniques and talents of the studio’s departments. During a networking reception, guests interacted with other professionals from the industry.

“We were very glad to welcome IAAPA members into our animation studio,” Gondinet says, “and, above all, to share our expertise and passion for 3D.”