From the Floor: Concept 1900's Human-Powered Carousel is a Throwback Twist on a Classic 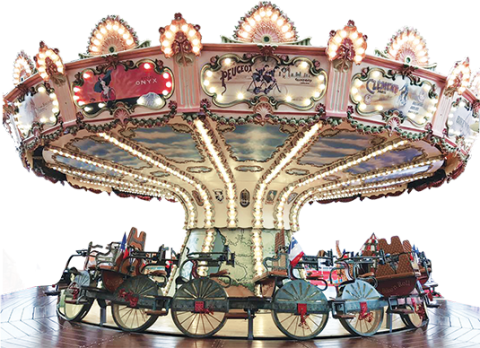 In the 1870s, when bicycles were still a novelty, British engineer Frederick Savage introduced the first velocipede-powered carousel. Early bicycles were attached to a platform and fair-goers pedaled to turn the ride. By the turn of the century, these human-powered attractions were relegated to scrap heaps as bikes became commonplace.

Vintage fans need no longer travel to the Musée des Arts Forains in Paris to enjoy the thrill of this classic carousel. Concept 1900 has launched a modern, Art Deco version: the Bike 'n Roll.

Only four people, or “three very strong ones,” are needed to power the carousel until it reaches speeds of up to 40 kph, providing riders with the thrill of the centripetal force. The ride has a maximum capacity of 40 riders.

“There’s a big future for this ride, which is back from the past,” said Concept 1900’s commercial director Inna Legrain. “It’s good business, because it’s new. People want to try it because they’ve never done it before; it’s not like a traditional carousel. In my opinion, after we sell two or three Bike 'n Rolls, everyone will want to have it.”

“Virtual events may be the future for exhibitions and trade shows. It’s very exciting. In Europe, we haven’t had this experience before,” says Legrain. “The virtual expo gives people the opportunity to open their minds, and for suppliers to show support to operators, who have been stressed. On top of that, it was easy to create the virtual booth.”

To visit Concept 1900 at their booth log in or register for IAAPA Virtual Expo: Asia today through July 30.

Get connected and grow with other IAAPA members.
Find a Supplier Find an Attraction

Discounted Expo Access
Discounted access to all IAAPA expos is just one of the many benefits members receive.
Discover Member Benefits

Find your passion in the attractions industry.