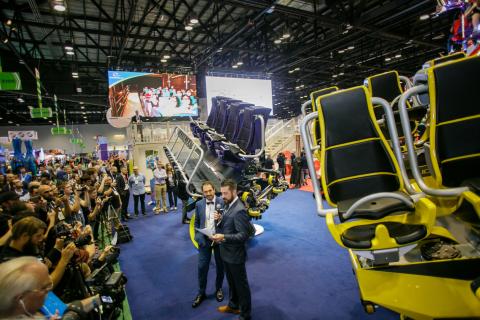 Zamperla (Booth #2024, 2031) announced that following its success with Luna Park in Coney Island, it had chosen the world’s largest agri-food park, FICO Eataly World in Bologna, Italy, for an 11-million-euro investment to create an indoor family entertainment center (FEC) called Luna Farm. It is the first farm-themed amusement park in Italy and will open Nov. 30, 2019.

The FEC, designed by Team Park Project, has an indoor surface area of 6,500 square meters within CAAB, the food and agriculture center in Bologna. “Luna Farm will be able to hold 1,300 people [simultaneously] and is going to teach children about food,” said Antonio Zamperla.

The FEC will feature 15 themed attractions, all manufactured by Zamperla. These include a suspended monorail in which guests will ride on board hen-themed vehicles and a mill-themed Ferris wheel. Zamperla said it will also be possible to experience augmented and interactive reality solutions developed by Z+ (ZamperlaPlus), the company’s high-tech division.

Zamperla also noted it has identified tweener rides—attractions for children demographically sandwiched between small kids and teens—for a new category of Zamperla rides the company calls Tweener RideZ. “These are for children no longer interested in kiddie rides,” said Ramon Rosario, sales director at Zamperla. “The criterion is 42 inches in height.”

The company has designed creative restraint systems that allow these young guests to experience the attractions that would once have been considered thrill rides with a much taller height restriction. Zamperla said it will continue to introduce attractions designed for these younger guests and their families. Expo visitors can experience one of these tweener rides, NebulaZ, at the Zamperla booth on the show floor.

Regarding Zamperla’s roller coaster division, Michael Coleman, Zamperla’s sales manager for North America, said, “We have provided more than 150 roller coasters worldwide and done so using a variety of different coasters. Our DangleZ Coaster provides 160 degrees of movement and accentuated airtime hills.” Once the coaster’s train tops the lift hill, the seats start moving independently of the chassis below, providing riders the feeling of dangling outside the track for a nontraditional ride experience. The DangleZ is a tweener ride and has just a 42-inch height requirement.

Zamperla also celebrated the upcoming 10th anniversary of Luna Park in 2020 and announced that its expansion will give guests four new reasons to visit the park. “Big WaveZ” is an interactive water ride that will make its worldwide debut and transport guests into the lair of the Roman god Neptune. “Ropes Course Adventure Zone” will allow climbers to experience breathtaking views of the boardwalk and ocean in a circus-themed four-level adventure area. “The Super Flume Ride” will provide guests with a semi-circle panoramic view of the shoreline, and “The Junior Coaster” family thrill ride will interlace with “The Super Flume Ride” and bend and curve throughout its circuit.