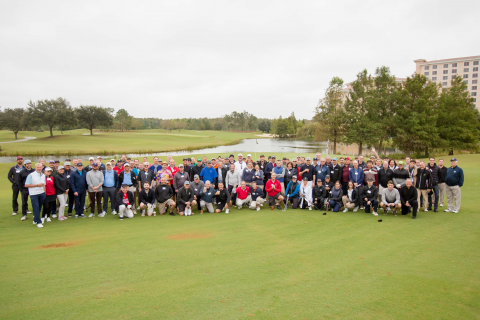 The tournament is the first official event of IAAPA Expo and is held each year to benefit Give Kids The World Village in nearby Kissimmee. Give Kids The World is a family resort that provides lodging and entertainment to children with critical illnesses and their families.

Tournament players come to the Expo a day early just to participate in this tournament, and about that, Pete Barto of S&S - Sansei Technologies, who’s attended eight of these tournaments, said, “Give Kids The World is special to everyone—it’s in the fabric of our DNA. The tournament is a tradition, and it’s the first major event where we see our friends.”

Chang Sun Lim of Inter Amusement Group echoed Barto and added, “Give Kids The World is fantastic, and I think the more people see what they do with the contributions, the more they will give.”

For some players, the tournament has personal meaning, like Franceen Gonzales of WhiteWater, who was playing with her husband, Michael Turner of The Producers Group: “We have friends who would benefit from Give Kids The World and what it does, and the stories that come out of that place are just amazing.”

Though there are some truly excellent golfers who participate in the tournament, Turner said he’s not one of them: “I play golf just twice a year! But I do this for a great cause, Give Kids The World, and also getting [the Expo week] off to a great start.”